Cycling in the Cape

Have you ever wondered what it would be like to ride on closed roads with crowds lining the route, live commentary, and the full support of broom wagons, mechanics and masseurs?  For the truly talented, there's the Tour de France, for the rest of us, try the Cape Argus Pick n Pay Cycle Tour!

The Pick n Pay is held in every March.  It started out around 25 years ago as a protest ride about the appalling conditions for local cyclists, attracting around 500 riders, far more than the organisers anticipated.  In 2004, entries were capped at 36,000, making it the world's largest timed cycling event.

'Tour fever' hits the in the week before the ride, with a professional stage race, the Giro del Cappo taking in much of the course.  From mid-week onwards the race HQ is open for riders to pick up their race number and timing chip.  The 'race pack' also includes a free jersey, energy bars and cereal, magazines and various other goodies.  Having collected your number you are funnelled through the retail area where you can buy any amount of race-branded clothing from socks and racing caps through to waterproof suits.  Upstairs is South Africa's biggest trade exhibition of bike retailers and manufacturers, and here you can also get free leg waxing, massage and even line up to have your head shaved for a cancer charity!


36,000 cyclists is potentially a recipe for race-day chaos but riders are given a start time and set off in groups of about 500 a few minutes apart, fastest riders off first based on previous form.  We are in an 'international' group, a mixed bag of racers, tourists and leisure riders.  The organisation is super-slick, with each group allocated a 'waiting area' before being called forward into the start area.  The music on the p.a. goes quiet, the countdown begins and we're off!


It's hard to hold back when the adrenalin is pumping and there are so many riders around, and the first miles pass at a furious pace as we skirt along the bottom of .  I glance at my heart monitor and my heart is rocketing away at 190 bpm even on the flat!  We soon leave the city behind and head out onto the coastal plain.  Everybody is fighting for a wheel as the famous Sou-Wester is blowing and there is a long single line of cyclists stretching as far as the eye can see.  I try to coax a bit more speed out of myself.  I’m riding a heavy utility bike designed for use in the townships and distributed by a charity called the Bicycle Empowerment Network.  I can't keep up with the fast riders but am going faster than the leisure riders meaning that I keep getting stuck between groups taking the full force of the ocean wind.


As we hit the coastal towns the roads narrow and everybody, regardless of ability, is forced into a tight bunch.  The only way to move past the slower riders is to barge into the narrowest of gaps and try to pick the good wheels to follow.  The towns are like British Victorian seaside resorts and the holiday crowds cheer us on.  The road follows the coastline with beautiful views across the ocean.  I latch on to a bunch from the Midrand Wheelers and we ride along chatting for a few miles until the feeding station.  They elect to stop but as I have a plane to catch in the afternoon I press on, anxious not to lose too much time.  As we climb onto the cliff road a sign warns of baboons on the road!  This is no joke, and in 2005 a cyclist was injured when a baboon jumped on his bike to steal a banana from his jersey pocket!  We crest the top of the climb and there is a long downhill to recover as we cut across inland past Ostrich Farms and wildlife parks back over towards the west coast of the .  This is one of the most beautiful and spectacular sections of the race, a rocky wild coast with massive breaking waves, beautiful white sandy beaches, including Boulders Beach where there is a resident colony of penguins, and thankfully the wind is behind us so we can enjoy the views!


Chapman's Peak is a magnet for the crowds, an impressive alpine-like climb that winds up the coastal cliff.  You can see the endless procession of cyclists ahead forming a multi-coloured thread against the yellow rock of the mountain.  People shout encouragement the whole way up, music blares out from camper vans, bands play at the side of the road.  It is an amazing spectacle and even my heavy bike seems to glide up the hill without too much effort with the enthusiastic will of the fans.

There is another long downhill to .  As we pass through a township I get special attention from the crowd as I am riding one of 'their' BEN bikes.  The final big hill of the day is the Suikerbossie, and it is as European in nature as its name, suddenly rearing up out of the town centre in the style of a Flandrian muir, but without the cobbles.  Again the crowds line the whole route, sat out with their picnic tables and barbecues at the side of the road, offering up beer to the riders and screaming at friends, family and anybody else who needs a boost.  I make good time up the hill and know that I can get back to the finish within half an hour of the top, but just as we are about to descend the police close the road.  A few people slip under the rope and the officials become more insistent.  The air ambulance is landing in the road to pick up riders who have crashed badly on the descent.  We are held for about 20 minutes and then released.  By this time riders are queued the whole way back down the hill.  I take it easy down past the crash site where ambulance crew are still attending to some of the victims and then cruise along the coast road towards Cape Town through the exclusive millionaires’ resort of Camps Bay, which looks like the south of France.  2km to go, hardly anything and yet it seems to take ages.  We enter the barriered-off finish, 1km to go.  I do up the zip on my jersey to milk the feeling of being a 'pro'.  It seems to take ages to get to 500m and then we see the finish line.  I sit up and salute as I go across the line, its over!


Needless to say that the finish is as slick as the start.  We get funnelled through gates where we receive our 'medal' and then through to the Cape Town rugby stadium where the whole pitch has been turned into a massive bike park.  Beyond this is a tented village full of corporate hospitality, food stalls and free massages.  I make my way to the organisers tent where they have laid on some free beer for us 'internationals' and slump down in the chair for a well-earned pint. 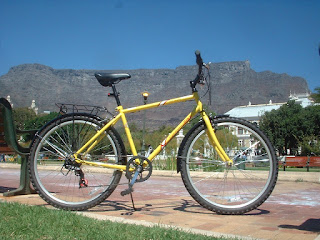