Castle Vale once had a bad reputation as a crime ridden failure of 1960s housing (see http://en.wikipedia.org/wiki/Castle_Vale).  It was notorious as a sink estate. It comprised of a mix of 8 massive identical tower blocks laid out in two lines together with a further 26 poor quality low rise high density housing blocks in a 'Radburn' layout linked by narrow pedestrian walkways separate from the roads, with large swathes of 'communal grassland' that quickly became green deserts.  The walkways (also used by cyclists)  were the venue for frequent muggings and may be one of the reasons why cycle tracks seem to be associated with crime in the British psyche. It became a no go area for Police in the 1980s, with officers being attacked.

Castle Vale is 6 miles from the city centre in the shadow of an elevated section of the M6 to the south, surrounded on all sides by major roads and railways and yet poorly served by local transport (Castle Bromwich rail station was closed in 1968 just as the new housing was almost completed!).  Birmingham City Centre is accessible only by a lengthy bus journey (and other destinations may require 2 or 3 buses), or if you have a car, by the 'Spine Road', a high speed dual carriageway built to try to regenerate the industrial wastelands in the late 1990s.  Access to employment therefore remains a problem for people without a car.  As part of the Cycle Ambition programme the City Council aims to create a continuous cycle track along the Spine Road from Castle Vale leading into the city centre.

The estate was built to house the skilled manual workers of the automotive and aircraft factories to the east of the city. Mechanisation and the gradual demise of most of the motor industry has taken its toll on this community over several decades, unemployment was up to 40% at the worst point. However, around 15 years ago it was given significant 'placemaking' treatment as part of an overall package of regeneration. The tower blocks were replaced with a mix of private sector and social housing and a new park in the middle of the estate. New jobs have been created in distribution, service and retail on some of the old industrial sites along the Spine Road, and Jaguar Land Rover now build cars on the site of the old Spitfire factory. While it still has its share of social issues, Castle Vale nowadays is a pleasant area with lots of green space, shops, decent schools and remarkably little vandalism compared to similar areas of the city. The regeneration process seems to have strengthened the community and restored pride in the area, for example the Wagtail project to create a nature reserve and footpaths/cycle trails on one edge of the estate was led by a member of the local community and largely delivered by local people.

I first visited Castle Vale around 8 years ago when I was working on regeneration of a neighbouring area. At that time it was still very new and a little bit spartan but now that the trees and shrubs have matured and some of the more garish brightly coloured post-modernist houses have faded a little it looks good.  I had quite forgotten that it has some half-decent cycle facilities that (with minor improvements) could easily be made into something comparable to a suburb in the Netherlands. Here are some key factors that make this a good environment for cycling:

1. Filtered Permeability. There is no useful direct 'through route' for motor traffic, any vehicle entering the area has to take a snaking route through the estate at 20mph on traffic-calmed roads, only to emerge around half a mile from their point of entry. So nobody goes through the residential area unless they want access to somewhere within it.  Its much easier (in a motor vehicle) to go around on adjacent main roads.

Similarly, all streets off the main route through the estate are culs de sac, so the only traffic turning in and out of the side roads is for access to that particular road.

By contrast, virtually every street has connections for pedestrians and cyclists, together with a number of dedicated green routes that run through the middle of the area to form a 'network'. The main distributor road also has continuous cycle lanes. 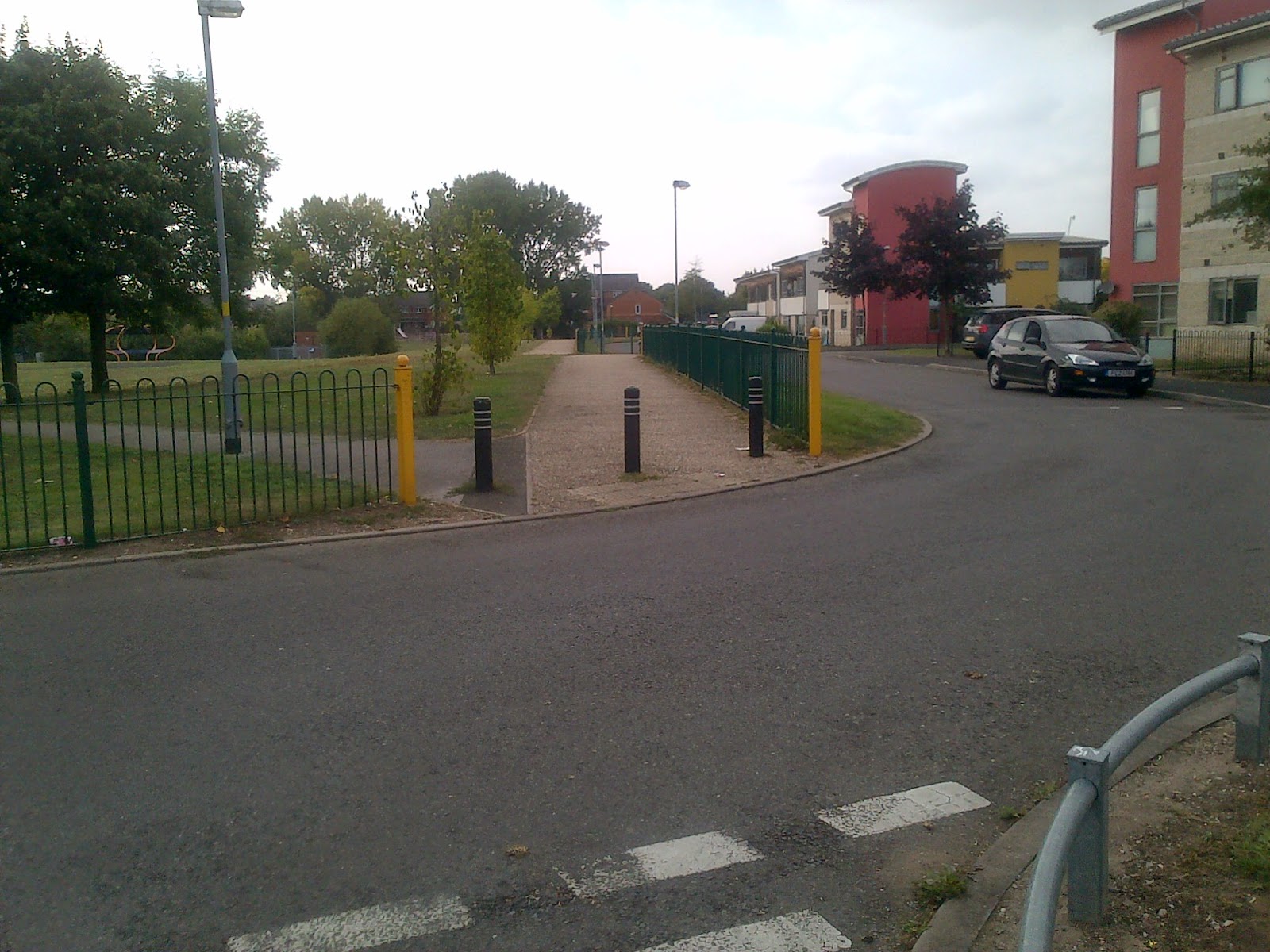 2. Low Speeds. A 20mph limit applies throughout. This is supported by physical traffic calming (horizontal deflections, narrowings, junction treatments and speed humps). The traffic calming is further reinforced by use of textured surfacing on build-outs and by use of block paving on the access only streets to indicate low-speed shared surfaces with no separate footways. 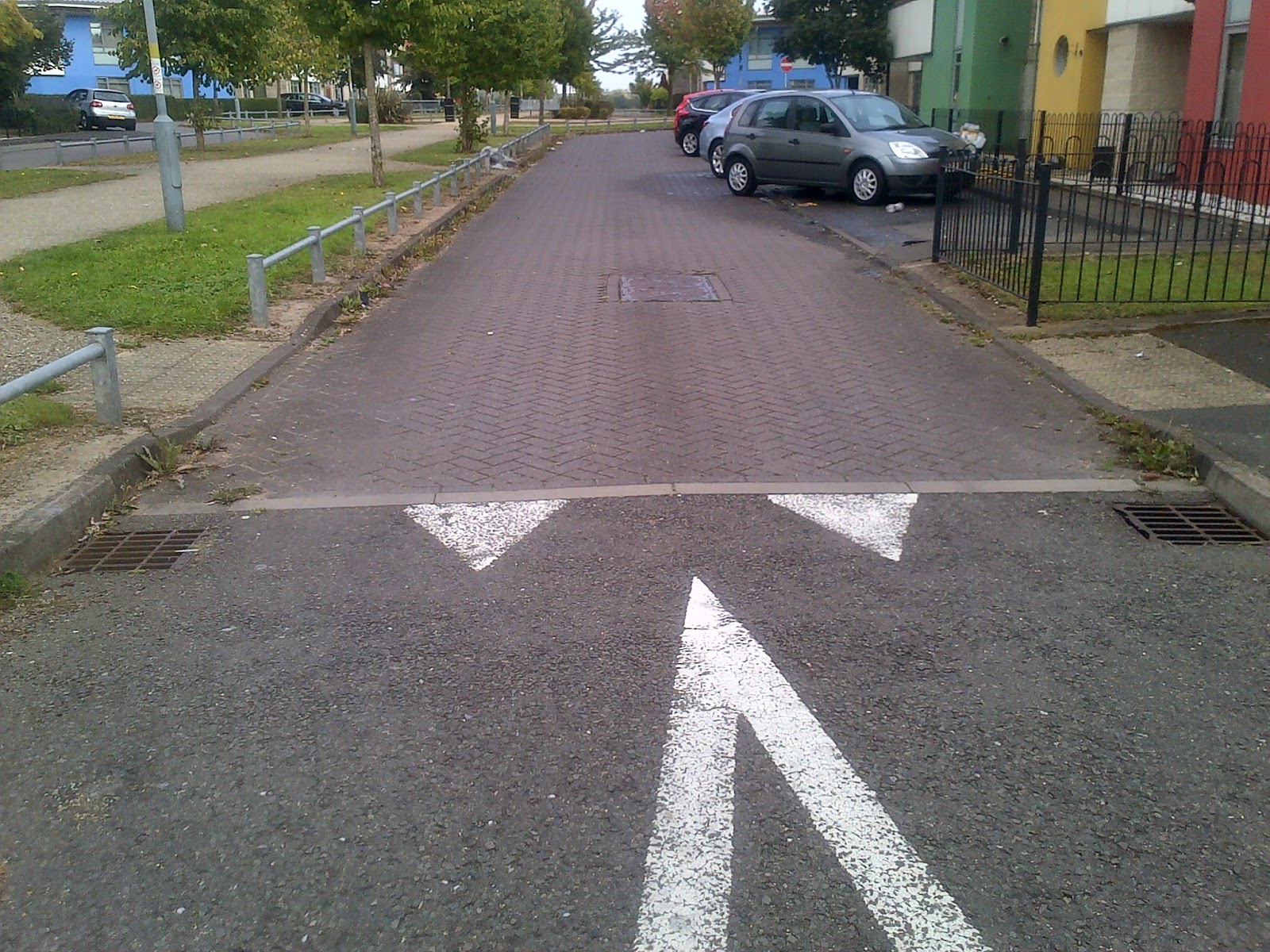 
3. Cycle Facilities. There is an 'almost Dutch' roundabout on Tangmere Drive, with fully separate pedestrian footways and cycle tracks, but sadly the cyclists dont get priority crossings (hard to get a decent photo to show it all but look on Google Street View!). This being Birmingham, there are few cyclists, but if numbers were to grow it would be easy to convert the roundabout to cycle/pedestrian priority with some zebra crossings. 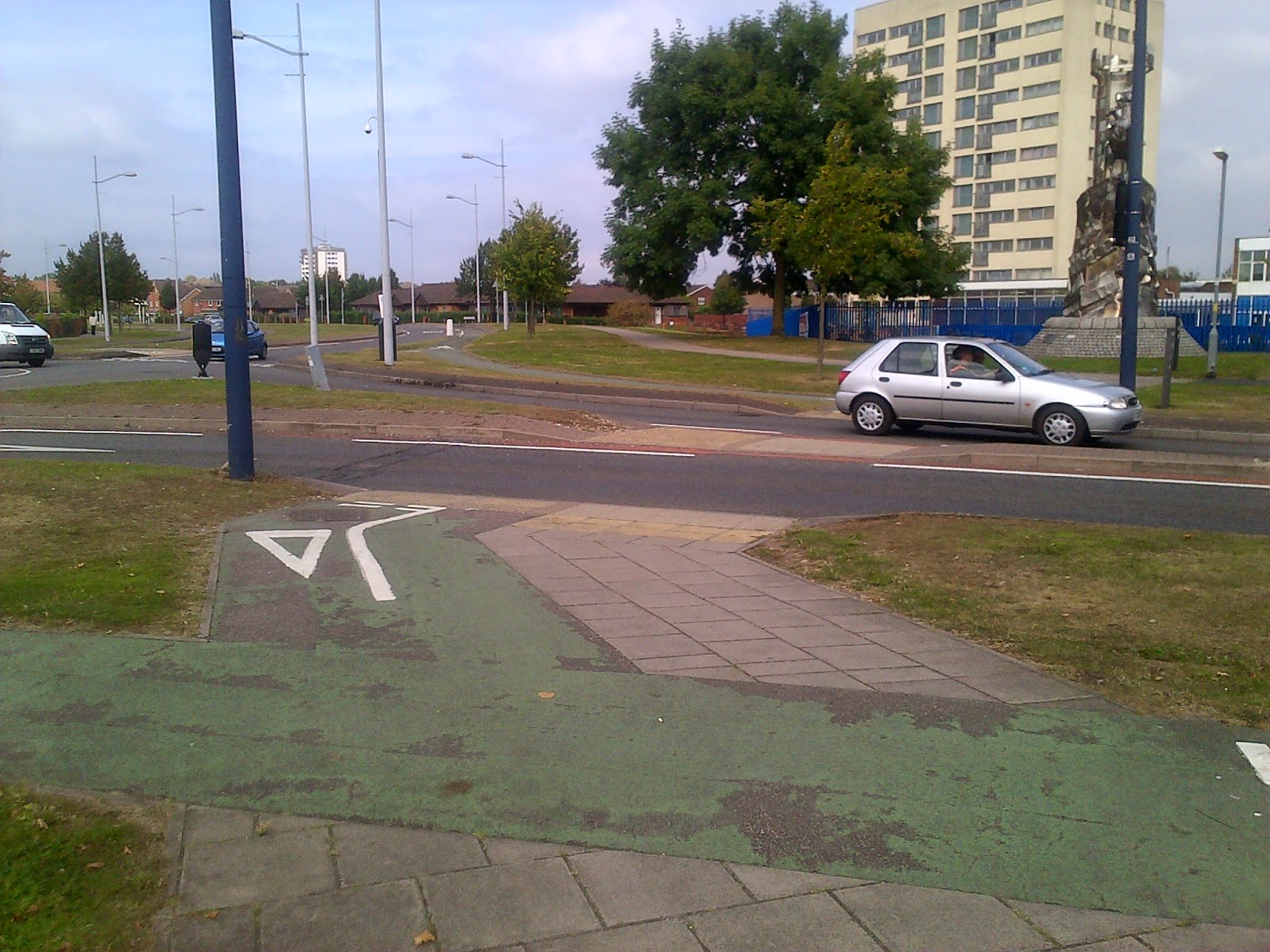 Parallel cycle/pedestrian crossing at roundabout. These are set back about 6m from the roundabout exit so could be given priority over the road.  There are few cyclists about however, so giving cyclists priority could actually be more hazardous where drivers are not in the habit of stopping.

There are cycle lanes and tracks along the main distributor road within the estate. 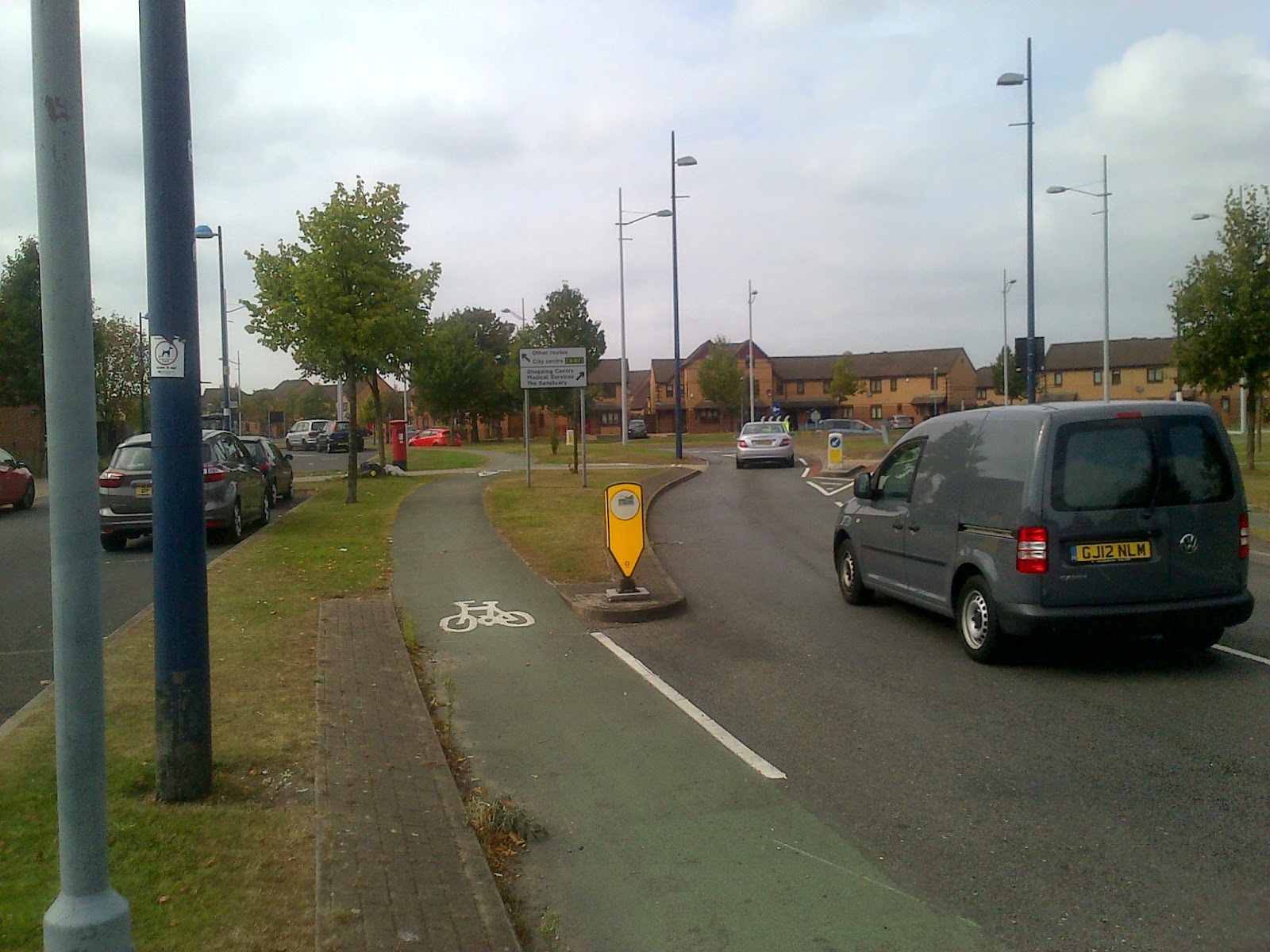 In the central part of the development along Tangmere Drive the road narrowings at pedestrian refuges have textured paving on over-run areas for buses and other large vehicles, together with a cycle bypass. These work well. 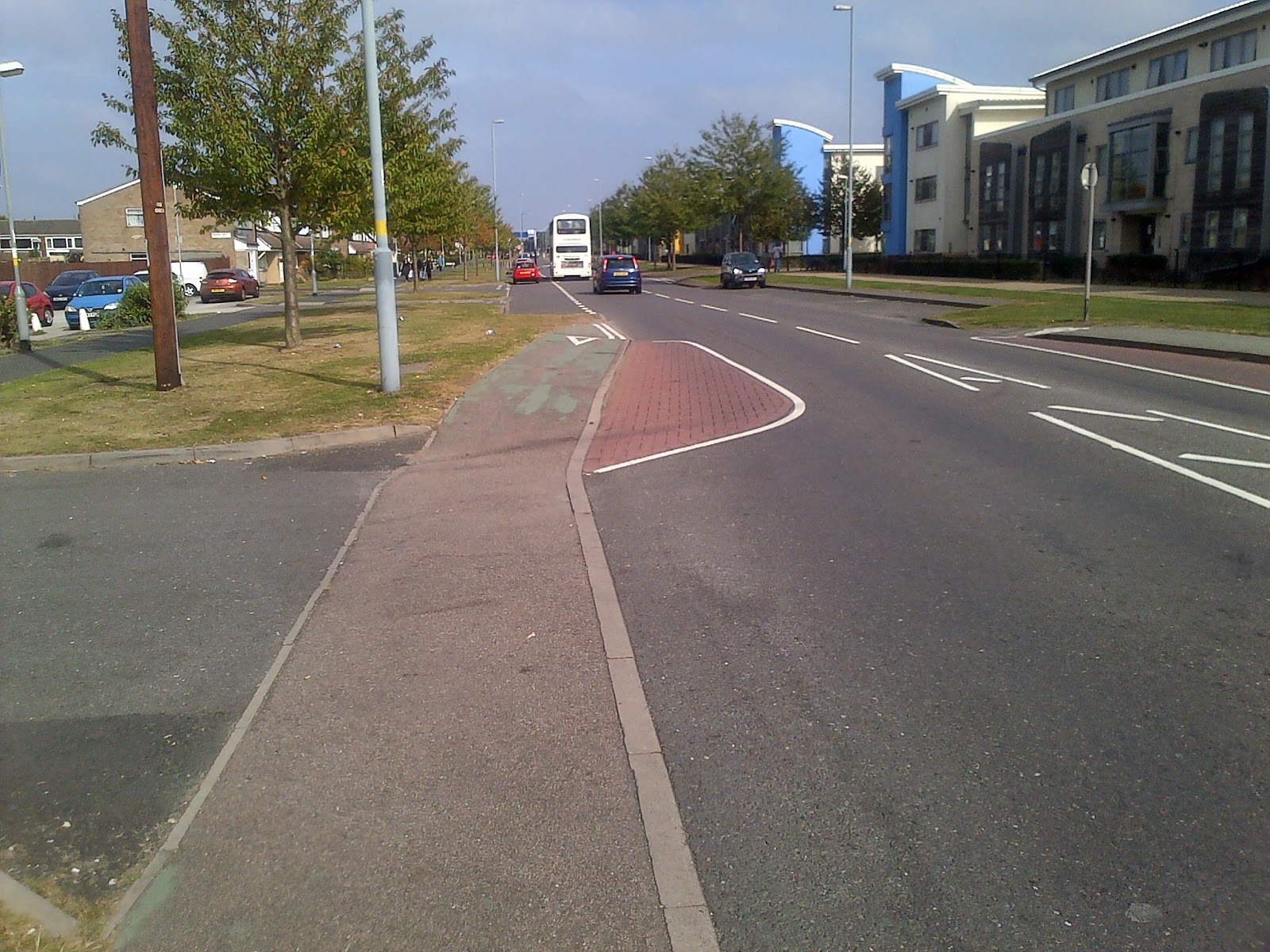 Point where cycle track merges back to carriageway after a road narrowing is protected by a textured over-run area. Car drivers do not drive over this (buses do).
Unfortunately on the outer sections such as Park Lane (where more houses were privately owned and therefore didnt get the full regeneration treatment) the design has been copied, but simply by using paint and coloured anti-skid, and every type of vehicle just drives over without slowing down. It is a minor design change and cost saving but has a big impact on the effectiveness of the traffic calming. 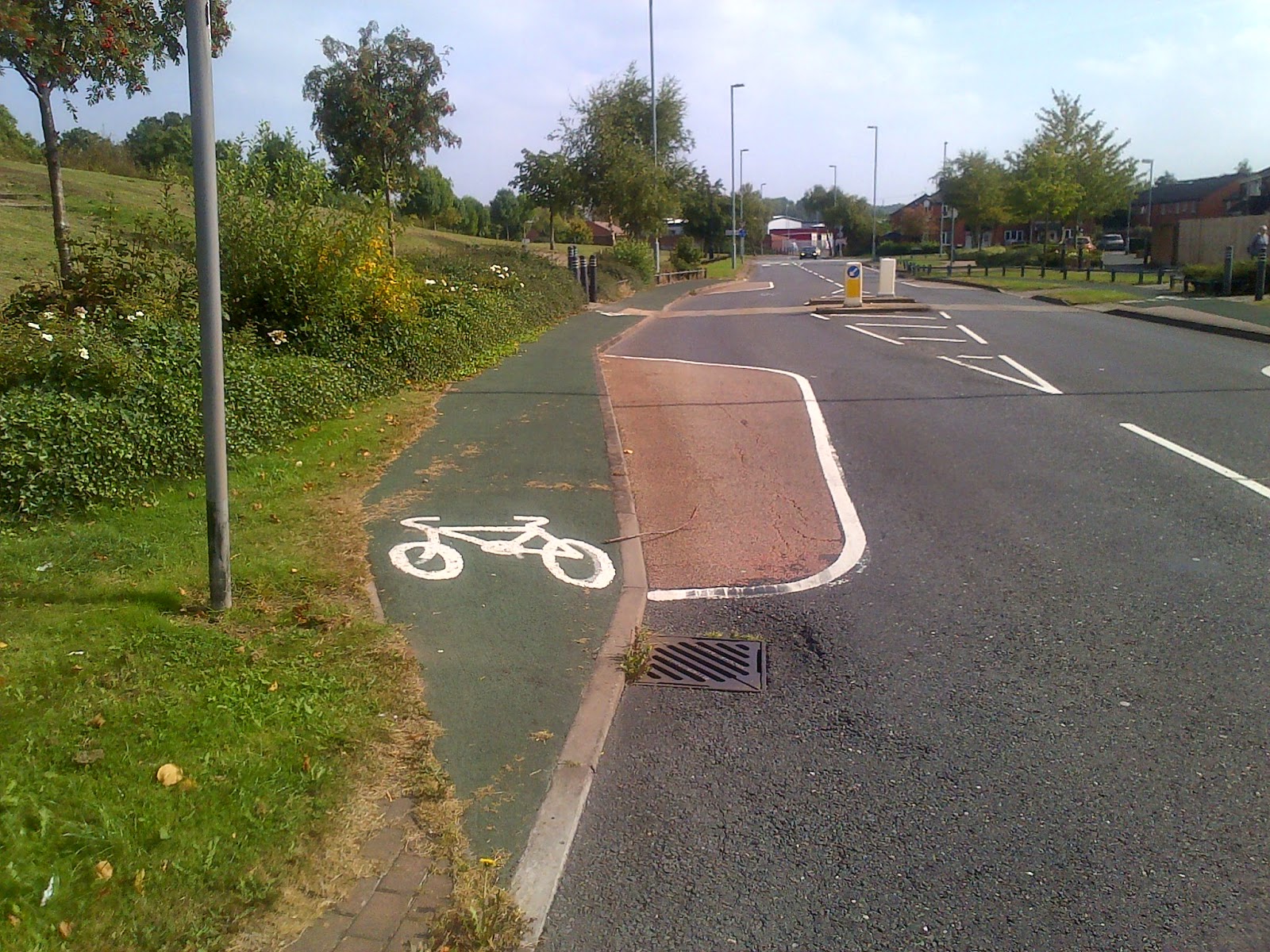 Same design feature but poorly executed using paint and coloured tarmac. This has virtually no traffic calming effect. Track also enables a two-stage right turn into a cycle ttrack crossing at the traffic island as well as bypassing the narrowing.

While Castle Vale might not have the ideal cycling facilities at a detailed level, the overall principles of traffic management measures to reduce the flow of traffic, a blanket 20mph speed limit reinforced by designs that deter speeding and a connected network of direct and attractive routes for pedestrians and cyclists offers a good blueprint for what can be achieved in suburban areas. The Radburn layouts common in many provincial housing estates do at least offer the potential for space for cycling (unlike narrow Victorian streets), having wide grass verges and other open spaces, and with careful architecture and urban design interventions the oppressive walkways that were hemmed in by tall wooden fences can be opened up to be overlooked by the adjacent properties to create attractive traffic free routes.