As I sit here the rain is washing away the exotic names and fun decorations that have been chalked across the roads for the visit of Le Tour to Calderdale. It has been interesting to watch the build up. When Yorkshire's successful bid for Le Tour was announced, I was recovering from neurosurgery at Leeds General Infirmary, watching preparations for the formal announcement ceremony at the Civic Square from my hospital bed. I used the enforced rest to start my blog and the first article I wrote was about my own 'journey' into cycling after watching the Milk Race follow a similar route to Le Tour in the 1970s ( how watching a bike race changed my life ).

That first post was read by Gary Verity and Peter Dodd (the successful bidders) and I was duly summoned to the Welcome to Yorkshire HQ for a meeting with them. At that point they were mainly concerned about finding sufficient funding to host Le Tour in the light of government indifference and the logistics of hosting a major spectator event in a region that is not blessed with the greatest transport infrastructure. My employers were able to offer some 'crowd mapping' and access work based on experience of doing similar for London 2012. Thankfully it seems to have all worked reasonably as predicted, albeit with long queues for trains simply because the ancient infrastructure has limited scope to provide longer or more frequent trains.

My efforts to steer the conversation towards legacy were perhaps a bit premature, but to me its every bit as important as the race. However, the headline legacy item was that 'every child in Yorkshire should have access to a bike'. Not a bad aspiration, so long as those bikes don't rot in a shed because parents are afraid to let them out! My last official work duty before the start of Le Tour in Yorkshire was to meet up with Chris Boardman at the Headrow in Leeds to share the work I've been doing to illustrate British Cycling's vision Headrow vision of what a more 'people friendly' street could look like as a part of a lasting legacy for the Tour of £10 per head per annum investment in cycling.

Will this be Le Tour legacy for a more cycle-friendly Leeds?

Over the past few weeks I've ridden most of the roads on the Yorkshire stages, all marked by copious bunting, yellow bikes and ever more creative shop window displays. I've had people clap and cheer me on the climbs and been accosted in cafes and on trains by complete strangers wanting to 'talk cycling'. It has been distinctly odd compared to past experiences of ridicule and hostility from the non-cycling public.

The road I use most frequently is Cragg Vale. It has a gentle gradient, ideal for interval training and the scenery is stunning, particularly in the morning or evening sunlight when I do most of my cycling. It can be a lonely place on the moors, but nowadays its not unusual to see anything up to 50 other cyclists during a typical 20 - 30 minute ascent. 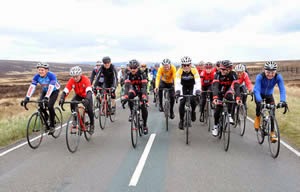 
The village of Cragg Vale is a good microcosm of the Yorkshire experience of Le Tour. Its a small linear village that sits half way up the longest continuous climb in England. In common with many of the villages on the hilltops around Hebden Bridge it has a great alliance of stalwart 'locals' and 'incomers' that bind the community together through numerous networks and activities.  Much of this takes place via social media supplemented by the pubs, churches and events that offer frequent opportuinities to meet up. 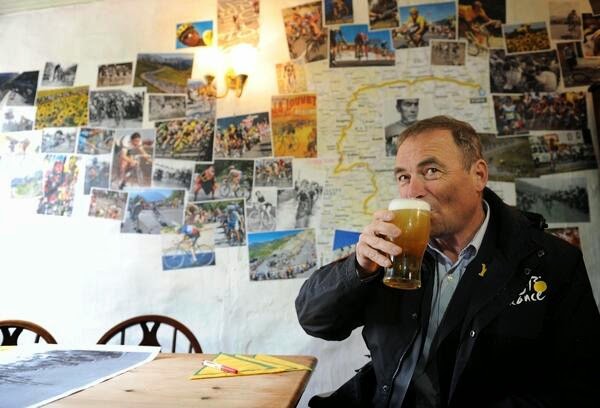 As a village the 'selling point' for Le Tour is the theme of 'The Longest'. Soon after the route was announced the villagers and wider community set out to create the world's longest line of bunting, stretching over 10km. This is typically British quirkiness at its best, and also wonderfully inclusive, virtually every household, school, community group and organisation in the upper Calder valley has contributed to the effort during the last year. Everybody feels a sense of ownership of this bit of Le Tour. 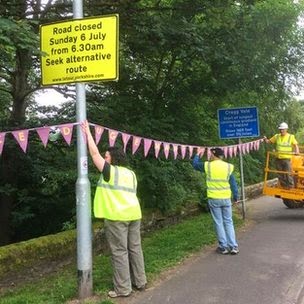 Bunting is all very well, but if you really want British eccentricity, how about cycling a grand piano 5 miles uphill. Well, this happened in April! Truly bonkers but so many people took part as part of the relay of cyclists and just following along in the crowd. 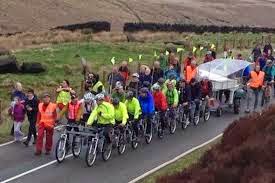 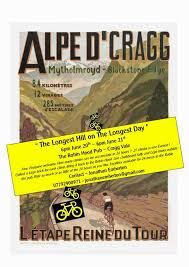 Last month, on my birthday as it happens, we had the 'Alpe de Cragg' a 24 hour event to ride the longest hill on the longest day. It started on the Friday evening with mainly club riders and MAMILs eager to ride through the night (chapeau to Dave Haygarth with 23 ascents!), but by saturday afternoon the hillside was full of families with cycle trailers and primary school age kids wobbling up and down the hill with barbie bikes and BMXs.  Our joint (and beautifully pointless) objective was to collect enough lego bricks (one per ascent) to build a giant bike!

As I was sitting having a pint after my own efforts (7 bricks!), a group of elderly ladies came down the hill after their one ascent, brimming with the satisfaction of achievement and fun, swearing to do another ride soon. For all but one of them, it was the first time on a bike for years. The roads weren't closed for this event, but the sheer volume of people forced a change in driving behaviour as children took to the road en masse.

One of the ironies of the massive support and enthusiasm for Le Tour from the local primary school kids and their parents is that it is one of the few schools in Calderdale that is ineligible for Bikeability cycle skills training. The reason being that the hilly road through the village is too dangerous to teach children to cycle on! Of course, 'the road' is not dangerous. The road users create the danger through their own selfish and thoughtless driving. If we can't even teach children to cycle within their own community on roads they use every day, what realistic hope is there for the legacy? Yesterday Cragg Vale was transformed into a linear street party. As I cycled up in the morning, children were playing in the street, drawing with chalk all over the road. The road was massively busy, much more so than usual. People were travelling, spending money, enjoying themselves, just not by car.  Over 20,000 people arrived on the hillside during the course of a few hours and yet there were people from toddlers through to tottering old men walking, cycling and playing all over the road. My own 'peleton' for the day included two elite team GB riders and a selection of 'fat dads' and hangers on. Also spotted on the day were local girl and paralympian, Karen Darke, on her hand cycle, one of our 75 year old neighbours, recovering from a heart bypass on his old Colnago and an ex colleague pedalling steadily upwards with children in tow, one on a trailer bike and a 7 year old on his own bike. It was truly cycling for everybody. This area is not easy for cycling going uphill requires effort and coming down requires some skill, but that didn't put people off. For one day, Calderdale resembled the Netherlands. 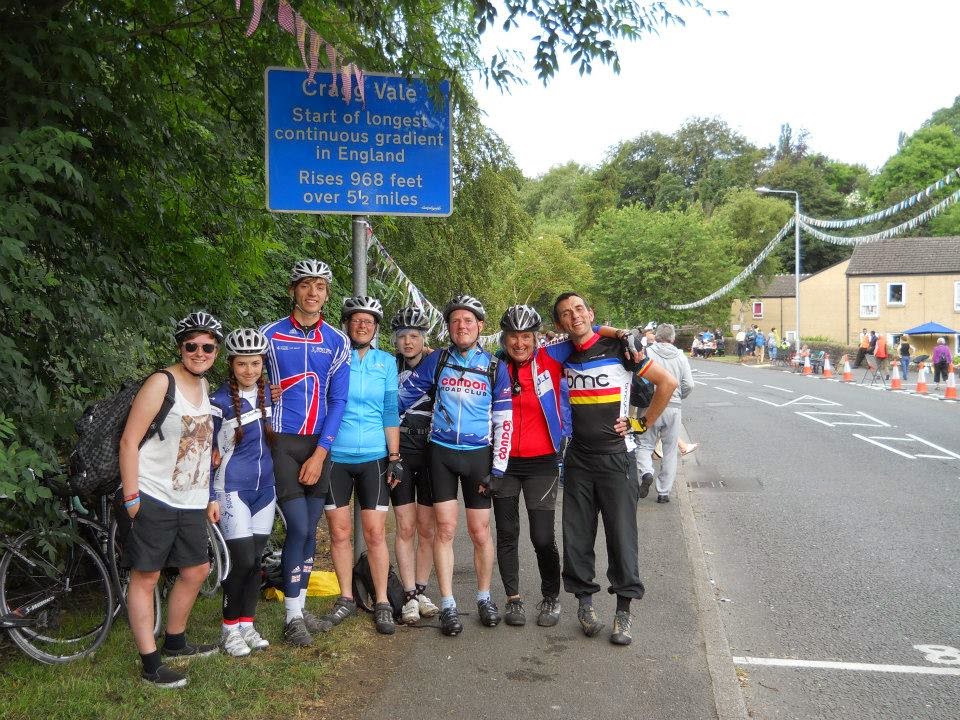 Some of our 'international' contingent of Brummies and Scots

Cragg Vale in 2014 has been a real hub of cycling for all ages and abilities. It will continue to attract the local racers challenging themselves to get up as fast as possible, but how many of those children will I see on the road the next time I ride by? Can we harness the same community focus and energy for the legacy of creating a place where street parties, and children and elderly people cycling become a part of every day life?