Occasionally a ‘must win’ brief drops through the letter box. In 2012 I received an invitation to tender from the Lake District National Park – ‘The consultant must be prepared to cycle all on and off road routes in the study area during the month of March’.

The Lake District National Park (in partnership with Cumbria Tourism and Cumbria County Council) received money from the DfT Local Sustainable Transport Fund to encourage healthy and sustainable travel and tourism within the area. Our job was to try to identify some circular cycle routes that would appeal to a wide variety of users. We set out to 'grade' the routes to give an indication of difficulty (based on gradient, traffic danger, technical trails or remote areas) and also to improve the signing. This was to help eliminate confusion over terms such as 'permitted path', 'bridleway', 'byway' etc that don't give a good indication of what users are allowed on which paths. 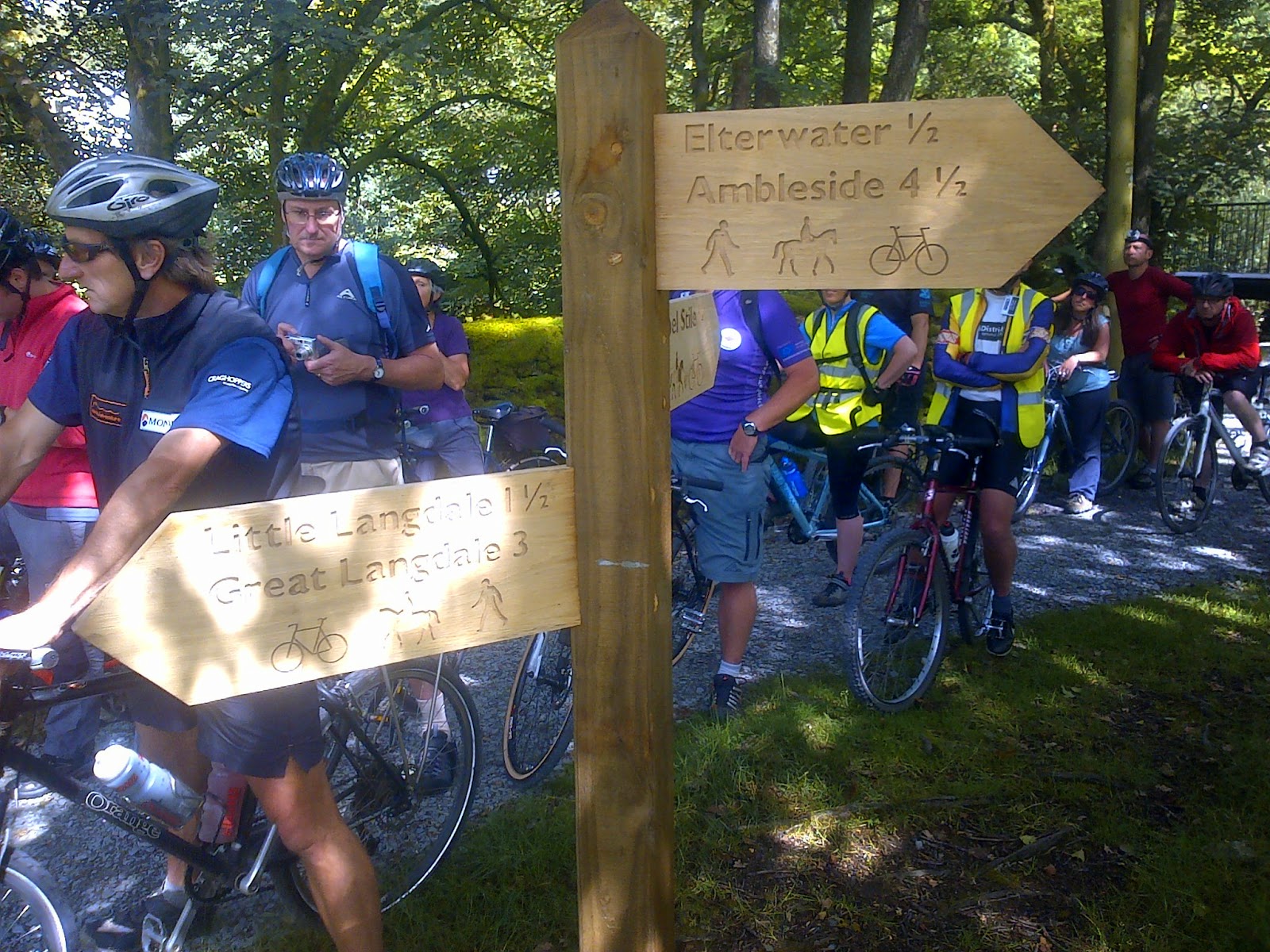 
One of the problems of the area (from a cycling perspective) is that it tends to be extreme; extreme gradients, difficult off-road technical trails, and extreme levels of traffic on some roads. At first glance, the cycling offer only appeals to real enthusiasts. However, take a closer look and there are many roads, paths and trails that largely run along the flatter lake sides and valleys. These routes, in combination with taking a bike on ferry services and bike-buses enables a circular trip that doesn’t involve busy roads, and the views from the ferry or the bus are excellent.

The car traffic associated with tourism is responsible for the majority of carbon dioxide and other air pollution in UK National Parks. Over 90% of visitors typically arrive by car, however this is not the major problem, and with relatively poor rail connections it would be difficult to alter this. The main issue is the short local journeys that occur within the National Park during a visit, sometimes in combination with inconsiderate parking on local roads.

People often move from one attraction to another, spending just 20-30 minutes in each place before moving on. Congestion can quickly build on narrow roads, and towns and villages become clogged as drivers look for a parking space. To save money, many day visitors bring a car full of food from home, so a day visitor brings relatively little money into the local economy.  Considerable expense is required to build and maintain the roads and car parks, as well as hidden costs of environmental damage and road accidents.

Sustainable transport solutions developed for the LSTF aim to replace some of those short local trips by more time spent on bicycles or on foot, so the car stays in one place for longer, easing congestion and minimising its impact. At the same time, because people are travelling more slowly they explore in greater detail and spend more money in local businesses. Cycle routes themselves can be a catalyst for new business and employment in catering, accommodation and cycle hire, often in quieter locations that are away from the main ‘honeypot’ attractions.

Advantages of more people cycling and walking in rural areas include:


·    Greater numbers of people able to access ‘hot spots’ such as Beatrix Potter’s house, where car parking capacity is limited.


·    Cars spend more time in one place, reducing the number of short car trips during the day, as their occupants explore the area by bike instead. This is better for pollution and congestion.


·    People travelling on foot and by bike tend to spend more money locally on refreshments and accommodation.


·    Organised activities such as cycling and walking festivals can be promoted around the infrastructure to extend the visitor season and to attract mid week visitors.


·    Cycle routes can be a way to attract visitors into quieter parts of the National Park that don’t have so much traffic.


A couple of weeks ago I pedalled up to the Lake District one afternoon along the Lancashire/Yorkshire border, sampling local delicacies along the way.... 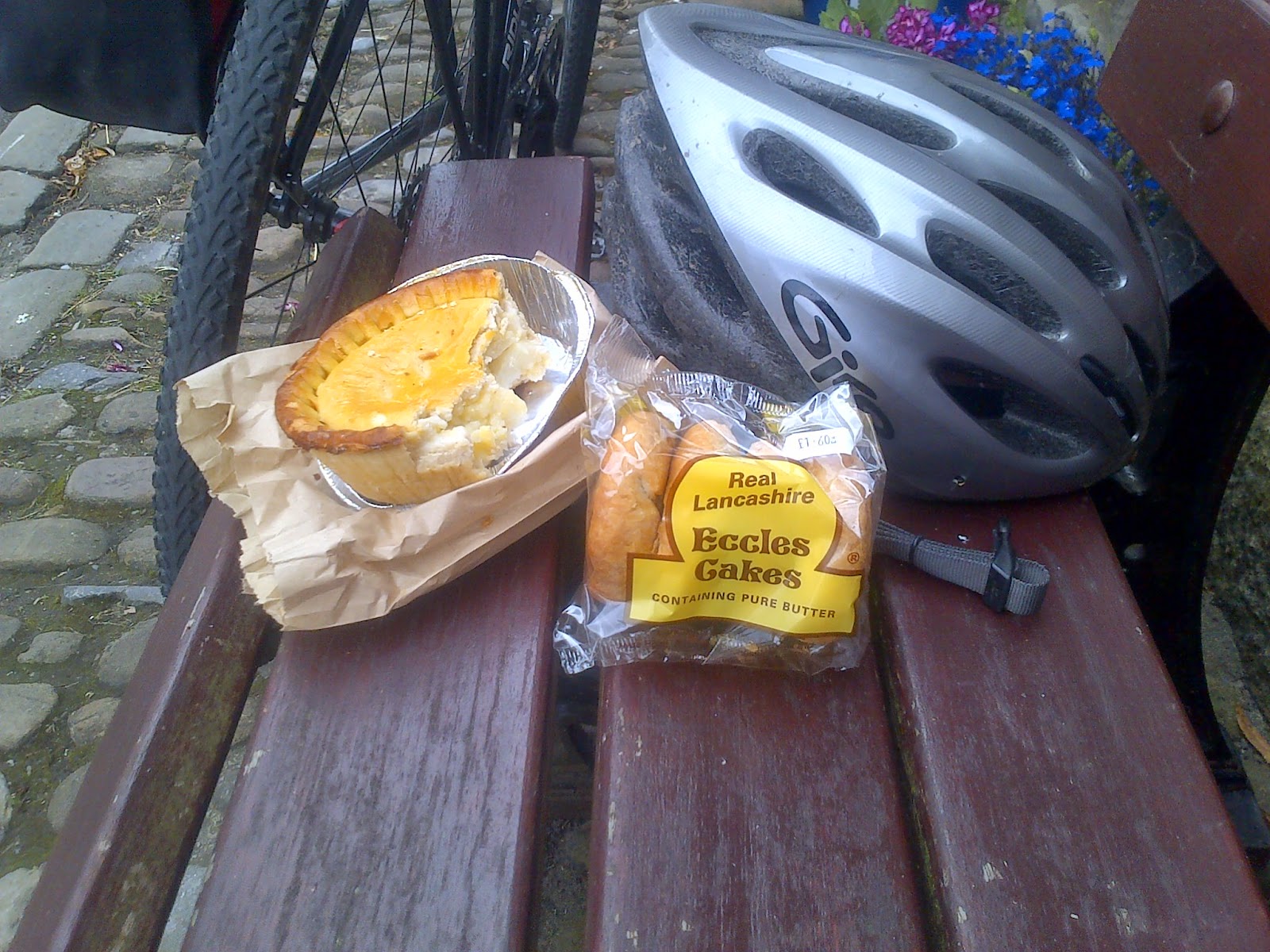 and next day went to the 'grand opening' of one of the improved routes, where Wiggo and Cav were on hand to do the honours! 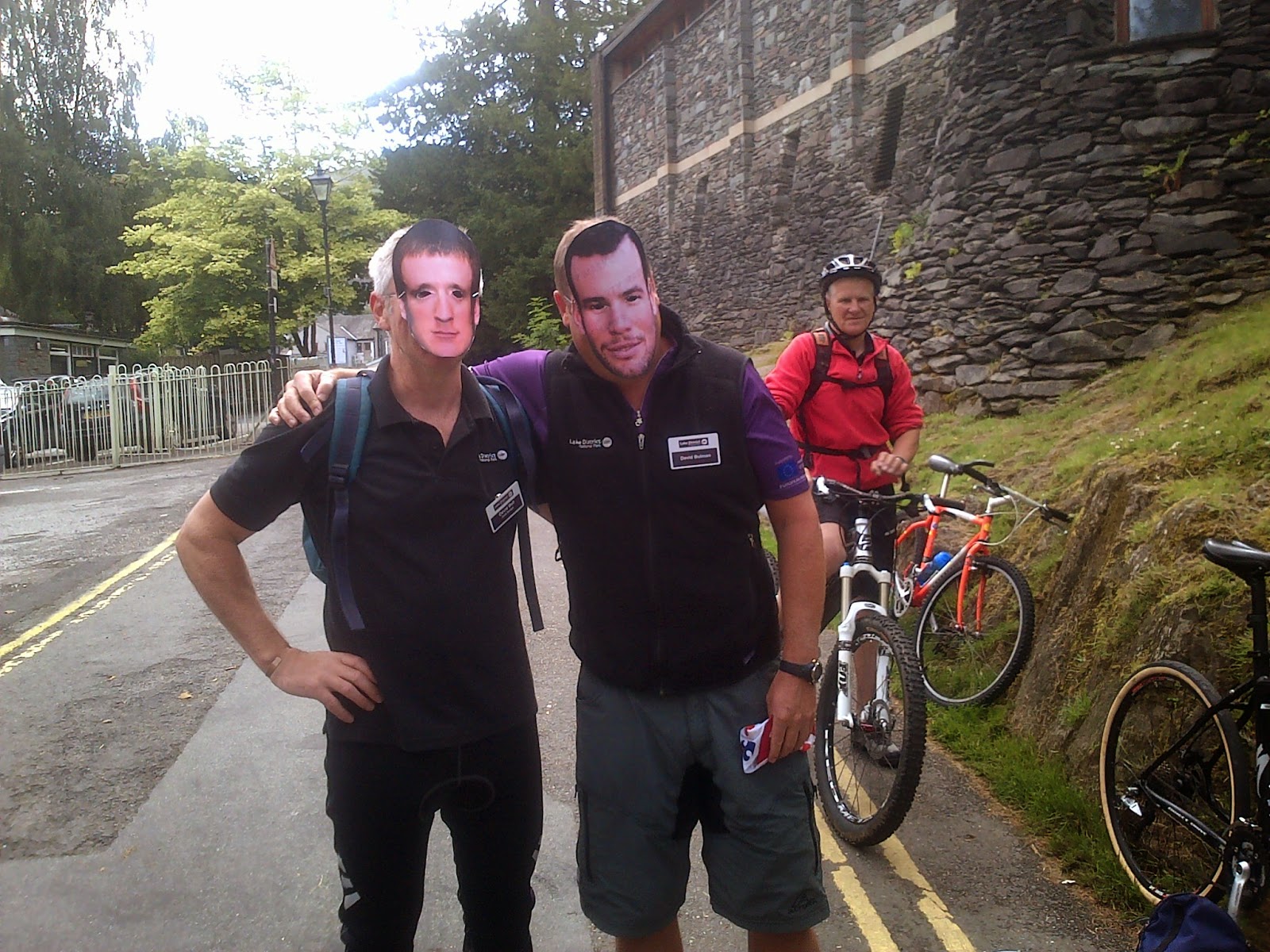 Wiggo and Cav wave us off 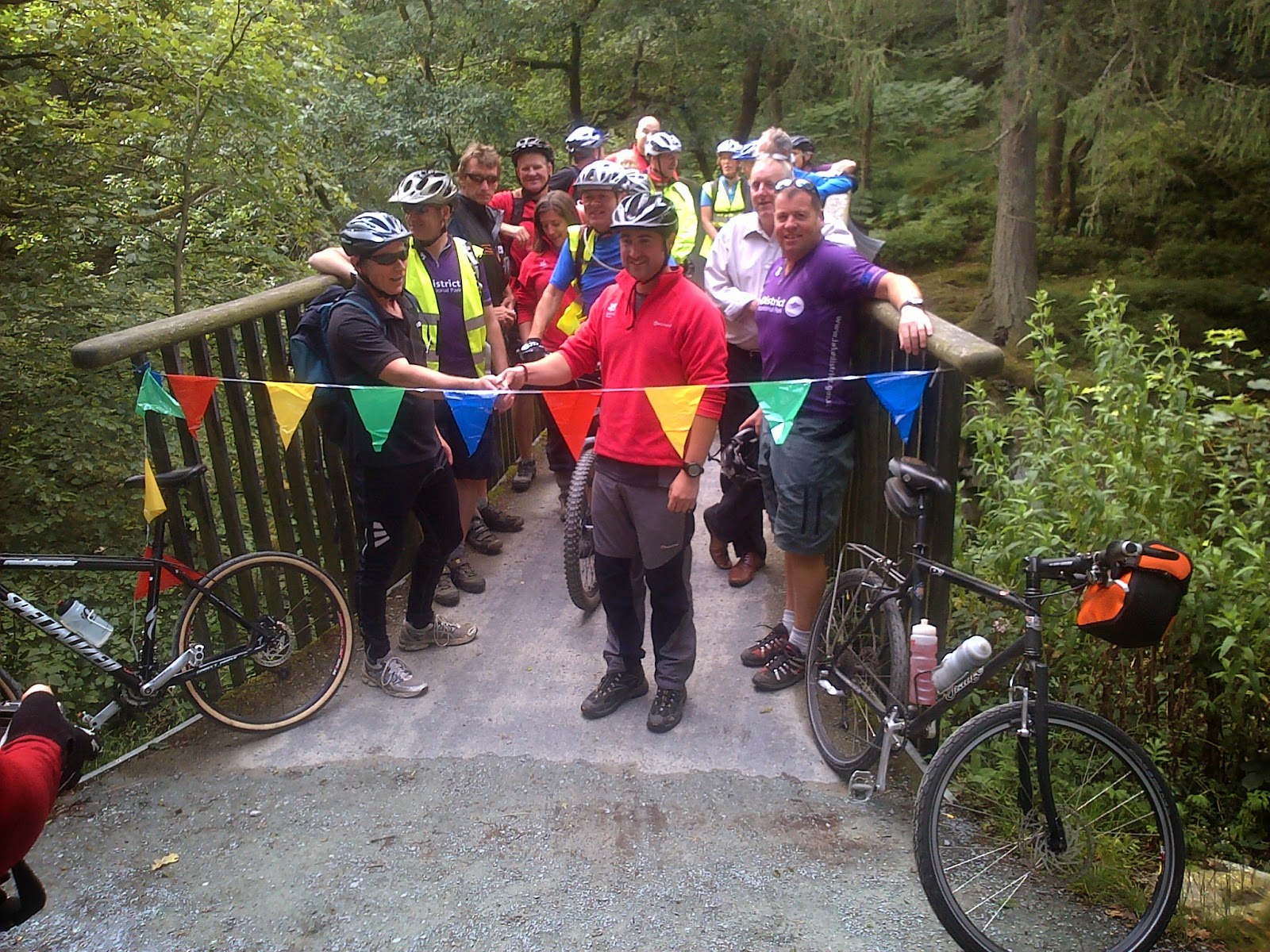 
The route from Ambleside to Langdale is typical of the issues that we tried to address within the study. The first problem is getting out of Ambleside, which is seemingly surrounded by busy main roads. However, there is a ‘secret’ quiet lane called Under Loughrigg at the far side of the village park. From here it’s possible to access bridleways leading to Rydal and Grasmere (currently being improved for cycling), or in our case, to turn onto a short section of cycle track alongside the A593 towards Coniston. Where topography constrains the road into a narrow corridor, cycle lanes on the carriageway have been provided. A short track over an attractive old footbridge leads into Bog Lane, a very quiet road that links to Skelwith Bridge.

At Skelwith Bridge we entered into the National Trust land across Elterwater meadow and alongside the river to Elterwater village. Here the path has been widened, resurfaced and realigned to help prevent flooding. The new flatter, smoother surface is also more accessible to both pushchairs and wheelchair users and others who would struggle to cope on uneven surfaces. This is increasingly important as a high proportion of existing visitors are older people who still want to be able to access the countryside, and the National Park also wishes to broaden its appeal to attract more young families with children, as well as younger people with a sense of adventure. This kind of easy access with a spectacular view is exactly what we were aiming to achieve within the project. 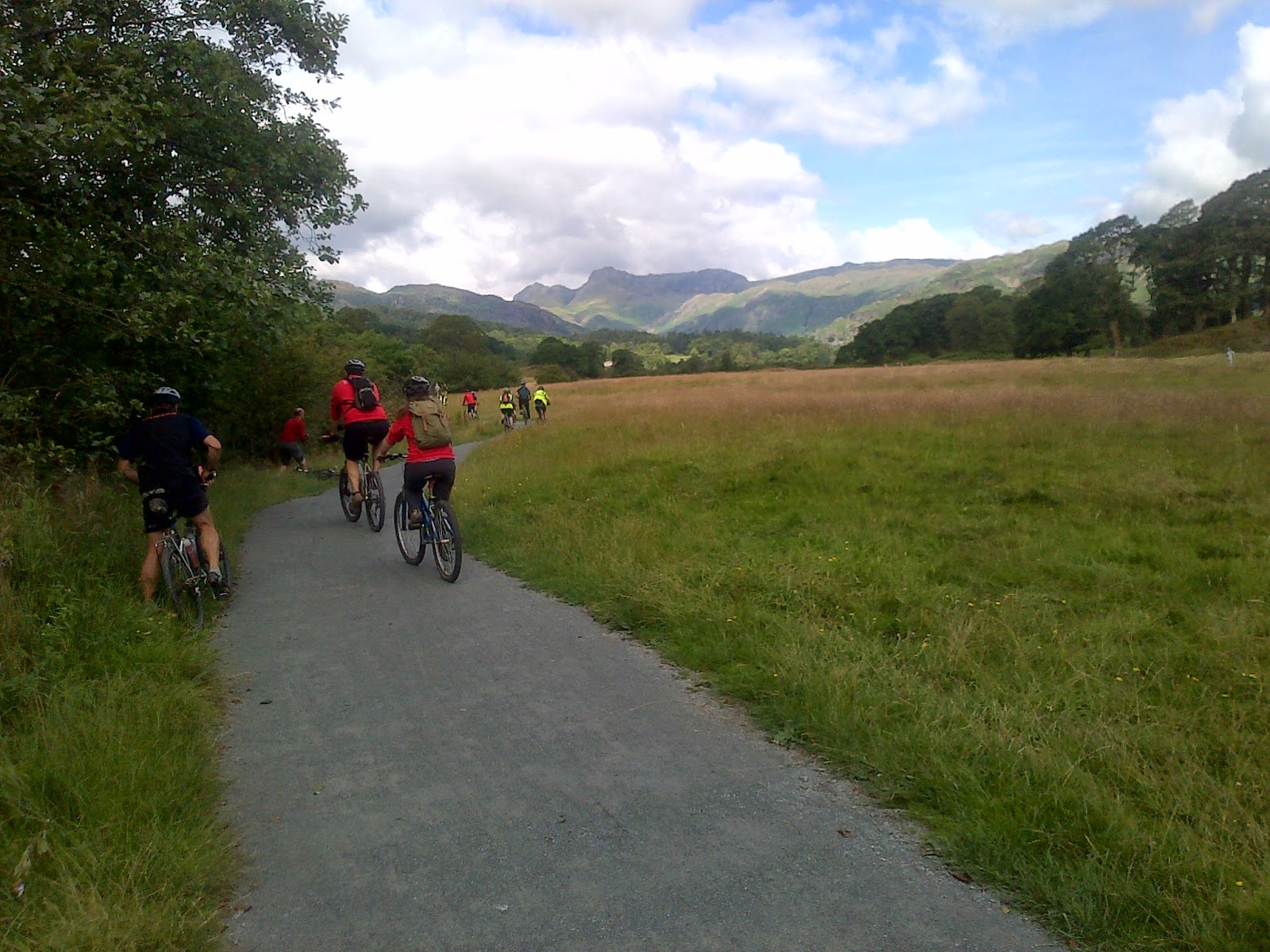 The route continues along minor roads and tracks to The 'Wainwright Bridge' which connects to a new section which gets a bit more hilly, with a deviation up the side of the hill to the quarry, before skirting along the hillside and dropping back across the fields to the  Stickle Barn. 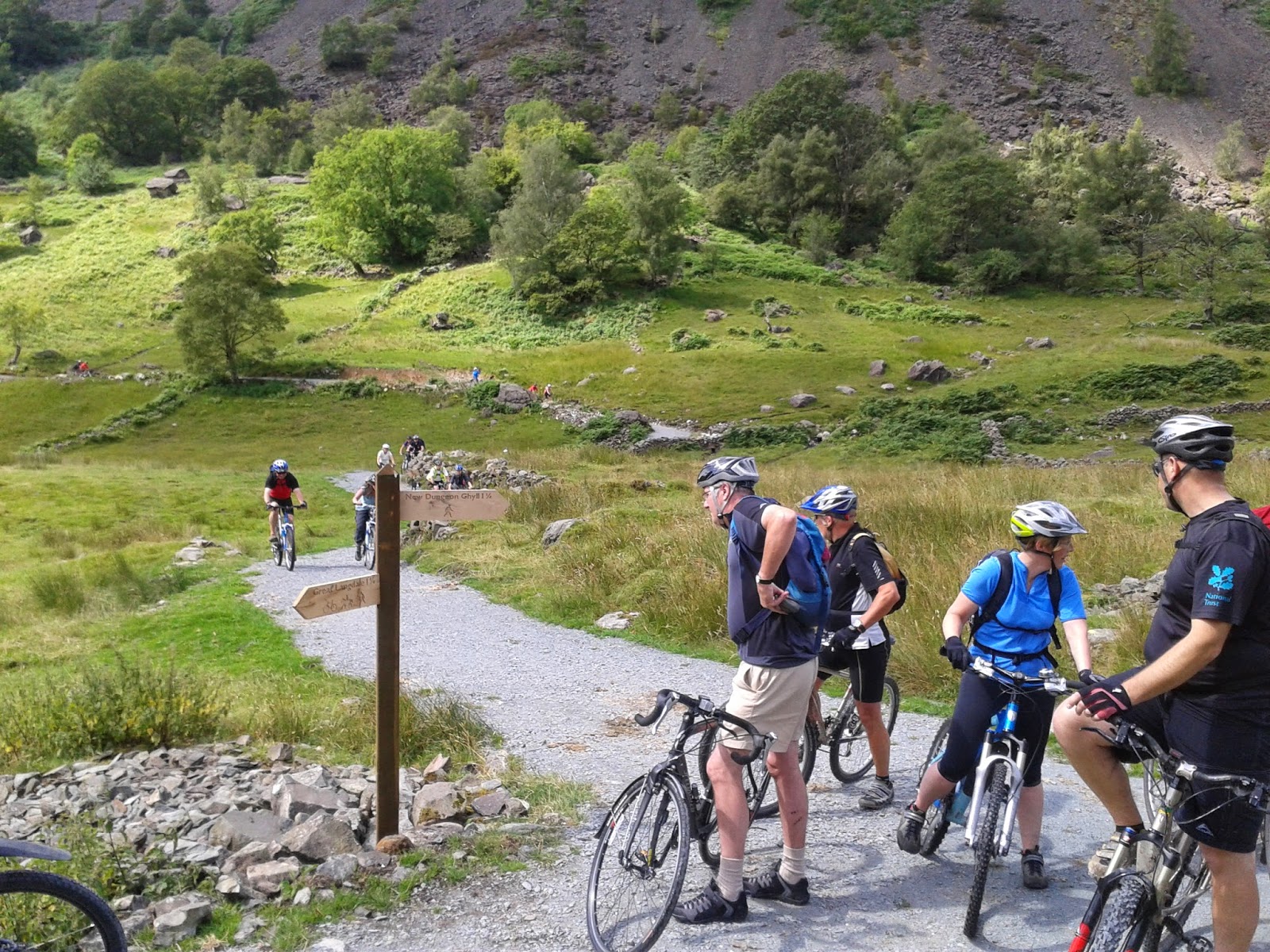 Exhilerating swoop down the fell side before crossing the meadows to the Stickle Barn pub for lunch.


Identifying the route was of course the easy part. The hard work has subsequently been done by the Lake District National Park in partnership with the Cumbria Tourism, National Trust, Cumbria Council and the local land owners, to negotiate, design and construct the trail. The project costs were about £100,000 to create the new paths and upgrade existing paths. A substantial amount of the money stayed within the local economy. The stone and surfacing for the paths was sourced from the Elterwater Quarry (Burlington Stone, owners of the quarry, also permitted the route to run through their land) and some of the construction was undertaken by a local farmer following a successful tendering process. In addition to creating local employment, local contractors bring substantial practical experience of creating paths that can withstand the extreme weather. Particularly dealing with the volume of water coming off the hillsides which must pass beneath the path if possible to avoid the  surface being washed away.

The path to Langdale is just one of many routes being developed. Along with the physical infrastructure other innovations in the overall 'Go Lakes Travel' programme include bike-carrying buses, an electric bike hire scheme and a range of promotional maps and events to highlight the routes and the attractions that they serve. Exploring the area by bike for the study has certainly changed my perception and, with the route improvements, it is now possible to visit one of the country's busiest national parks and yet spend many hours virtually traffic free either on or off-road. For more information about cycling in the area visit the  Go Lakes Travel and  Lake District National Park  websites.