With the end of summer and onset of darker nights, there is always a temptation to cut back on the cycling, but with the Three Peaks looming and some very pleasant weather, September and October have been one of the best parts of 2014.

September started with some reviews of Birmingham City Centre with representatives from local cycling and pedestrian groups to help decide what to try to do to improve something that is often a pretty poor environment due to accommodating the needs of cars (see previous posts).

This was followed by a technical visit to Cambridge with staff from Birmingham, Leeds, Newcastle, Manchester, Bristol, Oxford and Transport for London. Here we saw the famous cycle/pedestrian bridge by the station, a city centre cycle park where you can ride in and hire a pushchair while you shop with the kids, 'advanced green' traffic lights to enable cyclists to get safely across a junction ahead of other traffic and a 'Dutch style' roundabout under construction. It was traffic geek heaven, and we really did discuss one set of traffic lights for a whole hour! 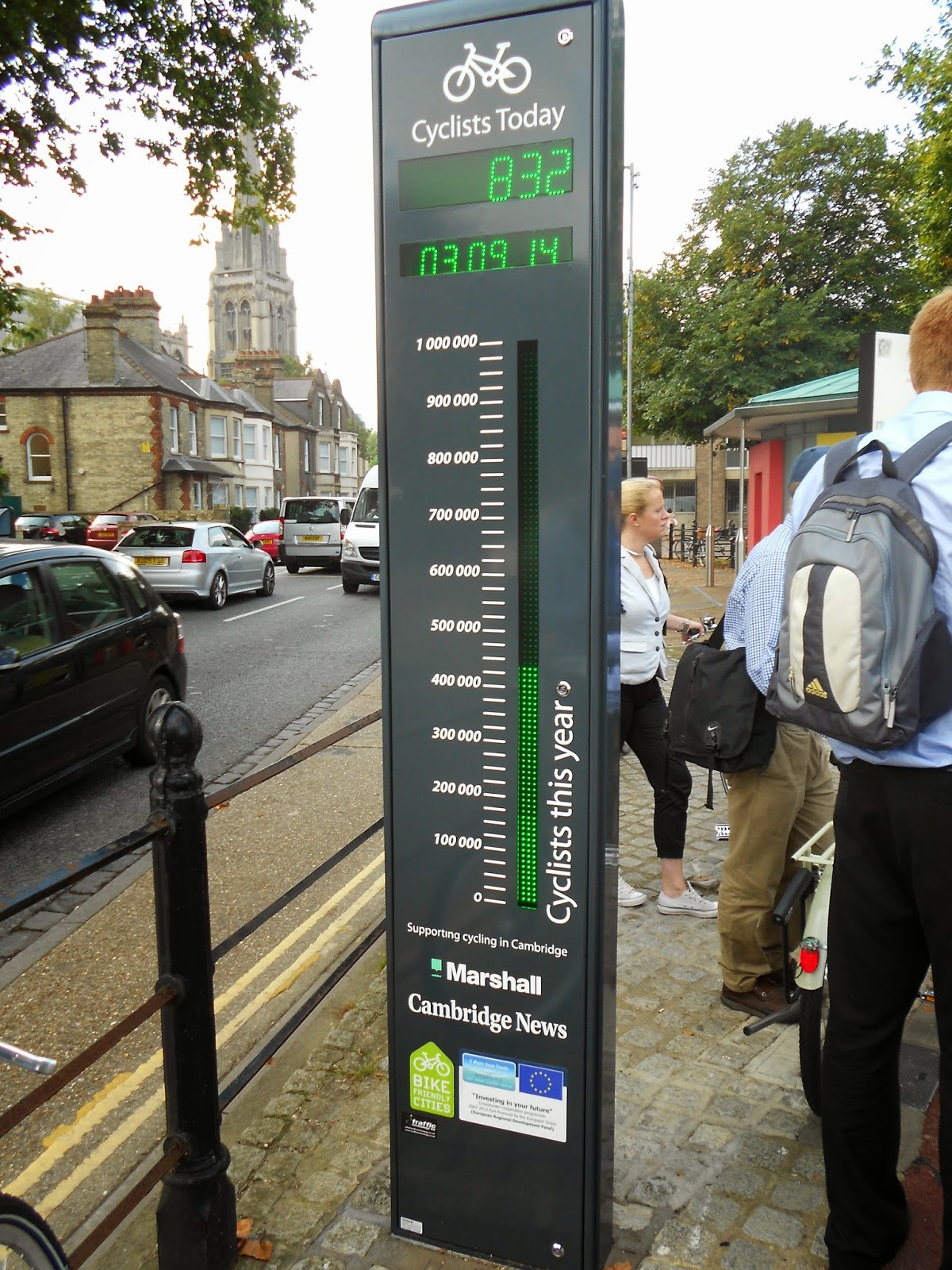 the cycle counter at Jesus Green

Due to work commitments, we didn't manage a summer holiday this year, but my wife and I agreed that we would meet up in Cambridge and set off around East Anglia and then towards home. Our cycling holidays are distinctly 'old school' in that we do cycle camping, we take some maps and choose roads and campsites that 'look nice on the map'. It can be a risky strategy, particularly as I bought many of my maps in the 1980s (Barthlomews 1:100,000 are just the best ever cycling maps)! However, I am pleased to report that sleepy Cambridgeshire, Suffolk and Norfolk appear to have changed very little since the maps were drawn.

I had my doubts about visiting the flatlands but as we headed east from Cambridge towards the coast there was plenty of undulation to be had.  The unexpected hills and navigating the maze of minor roads meant progress was slower than I'd anticipated and we certainly weren't going to make the coast after a late morning start. We had a rethink and stopped for afternoon tea at Lavenham, a historic market town at the centre of the mediaeval wool trade. The tourist information office gave us a list of campsites and we headed for one to the north of Stowmarket.  There was not muche evidence of a campsite when we reached the address, and we knocked on the farmer's door with trepidation. A slightly deaf elderly man answered. "Oh I used to offer camping but there's not much call for it nowadays. You can pitch in the old orchard if you like, there's a toilet and a sink in the shed."

Our campfire rice pudding that night was enriched with stewed apples and blackberries freshly picked from the orchard.

In the barn next door there were two army jeeps and a whole museum of wartime and farming memorabilia. We were given the full tour and history of the restoration of the vehicles the next morning when Mr Jubb and his mates, dressed in the full GI uniform, set off for their weekly drive for morning coffee. As the owner of a 50 year old Land Rover that occupies much of my non-cycling time under the bonnet, I had a lot of symapthy for the restoration and the enjoyment of the endless tinkering to keep these vehicles alive.

It was another late start as we set off towards the coast, aiming for Leiston Abbey and Minsmere RSPB reserve just north of the Sizewell nuclear power station. We were soon lost in the myriad lanes, and an old man on a bike caught us studying the map at a junction. It turned out he was just on his way home to Norwich after a three month tour (at the age of 83), taking him through Europe to the Czech republic and back. He was aiming to get home that day and spend his first night in a real bed since setting off with his camping gear in June!

It was a warm but slightly misty day, the sun never quite breaking through, giving an eerie silent quality to the swampy woodland and heathland. After tea and cake at the RSPB visitor centre we ventured off-road to follow a sandy bridleway north across Dunwich Heath nature reserve. I wanted to go to Dunwich because the overnight ride from London called the 'Dunwich Dynamo' is on my 'to do' list when I get the opportunity. I imagine that it must be magical to arrive for a well earned breakfast at the austere wooden cafe next to the bleak pebbly beach at dawn.

Journey's end that day was the genteel seaside town of Southwold, home of Adnams brewery. We were too late for the ferry from Walberswick so we cycled over the footbridge across the marshes and along the ramshackle harbour. This is the sort of 'posh' seaside that features in Famous Five stories, where kids wear 'gum boots' and 'mackintoshes' (albeit from Boden nowadays) and Guardian readers buy beach huts for the same price as a house in the north. It is a far cry from Blackpool, Morecambe and Scarborough where I spent my childhood holidays. There is no denying however that it is charming and pretty, and we had a fantastic meal at the harbour pub, washed down with several pints of Adnams, leading us to throw caution to the wind and pedal into the dunes for a midnight walk along the sands, with the lighthouse blinking from the town.

So it was yet another slightly hungover late start, followed with a compulsory swim in the sea and a warm up coffee, then a trip along the pier. Fortunately it was a fast and easy road to Beccles in time for a picnic lunch down by the river, enjoying the unseasonably warm sunshine. We were in Broadland, dissected by attractive rivers, streams and lakes. We crossed the River Yare at Reedham Ferry, heading for a campsite near Horning, just another ferry ride away over the River Bure, or so we thought. It had been a fairly long afternoon, we'd stocked up with food at Acle ready to stop in a few miles. But here our 30 year old maps defeated us. The Horning ferry no longer exists and we reached a dead end, looking enviously at the people in the pub just across the river and the campsite behind it, but over 20 miles away by road. Reluctantly we retraced our steps and headed towards Wroxham, resigned to two more hours in the saddle. Luck was on our side though, a roadside pub on the outskirts of Wroxham had a big field available for camping and caravans and we had a place to stay after all.

It was a chilly night, followed by another scorching day. As we set off we encountered hundreds of cyclists in the 'Tour of Norfolk' sportive. Once we were passed Coltishall and back onto minor roads we probably saw fewer than a dozen cars all day. We ended our day in Swaffham, in the Breckland area. I was once paid to devise some cycle routes in this area, based around the Peddars Way. The brief specified that we had to visit every pub in the area to check opening times and whether food was available. Tough job but somebody had to do it!

There was a heavy, almost frosty, dew when we got up the next morning. A definite hint of autumn. we spent the morning at Oxburgh Hall, a moated manor house before making our way to the Denver windmill and Denver Sluice, a massive flood prevention barrier. Heading west into fenland the landscape is Dutch, a drainage system designed by a Dutch engineer in the 18th century has created this place. Long straight roads follow the foot of dykes. Much of the agriculture was onion crops, and for miles and miles we could smell onions in the warm air, and tractors pulling vast trailers full kept passing by. 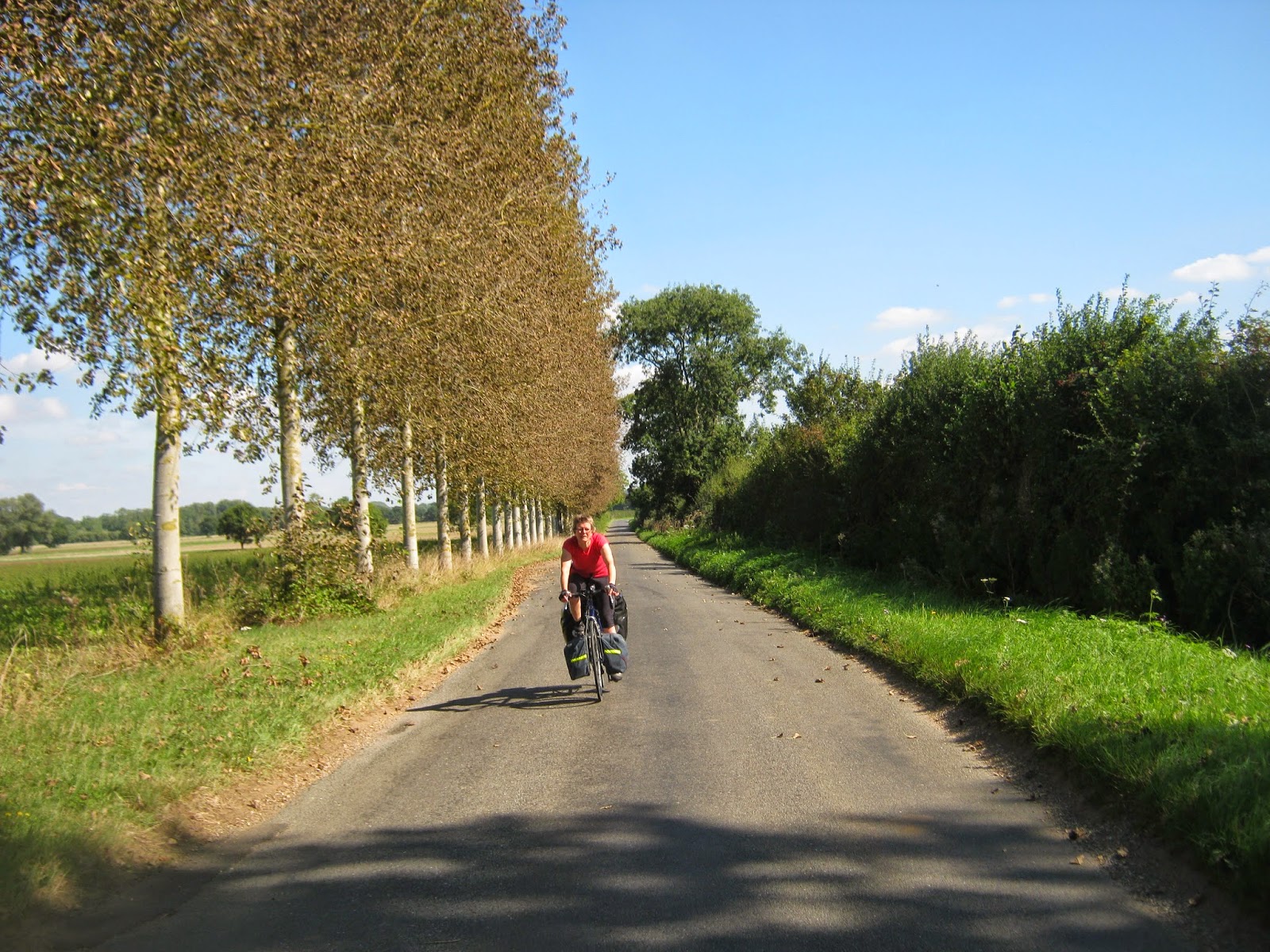 At several points we followed or crossed the National Cycle Network, but it was of little use to us because there were no destinations on the blue signs, just a NCN route number. Very frustrating, particularly as we missed out on a quiet and shorter route over a new bridge on the the River Nene into Peterborough from Whittlesea because it just wasn't signed. I imagine the route cost £several hundred thousand, but even as a cyclist who wanted to use it, it was hidden for the sake of a few decent signs.

A week later I was invited to a cycle industry taster session at the Manchester Velodrome. Its 5 years since I last rode a track bike, but this was at least an advantage over those who had never even ridden fixed wheel. I was a bit nervous since I have some balance problems and riding in a straight line can be tricky at times, but after half an hour we all started to relax and swoop up and down the bankings. I'll never be a Chris Hoy but the 'rush' of plunging down the banking onto teh straight and into the next corner at top speed is addictive. Looking around the track we were all grinning like idiots! 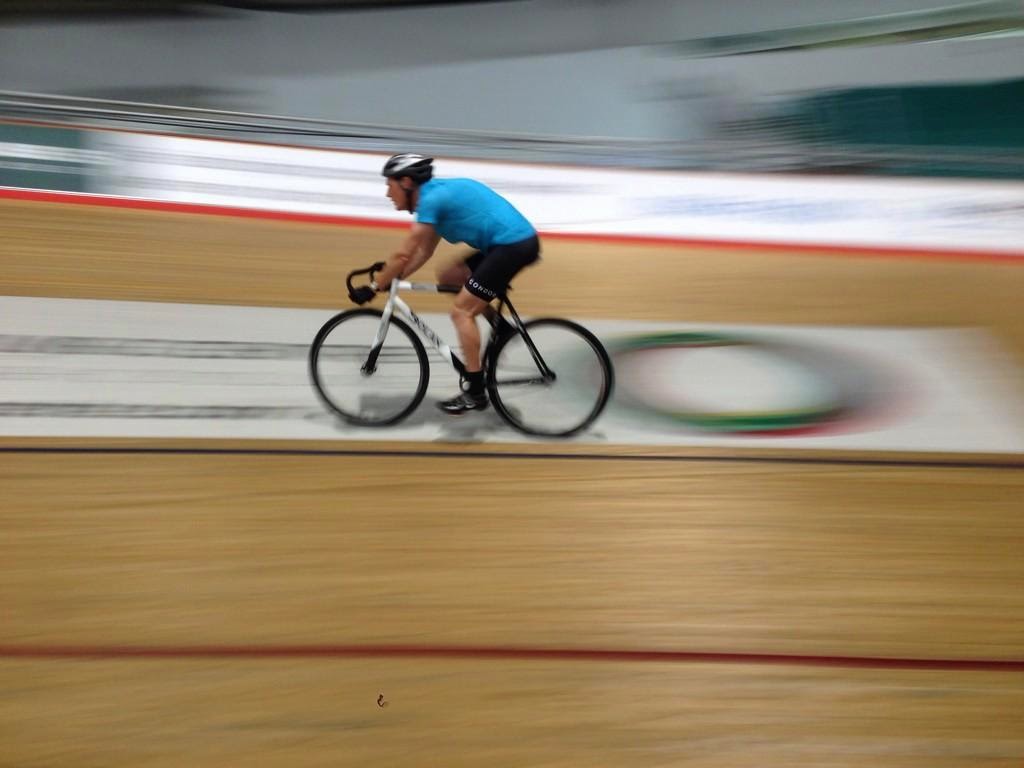 Demonstrating that 'cyclo-cross' position on a track bike!

My daughter (who works at a cycle recycling place) an I visited the NEC cycle show. I have visited cycle shows fairly regularly since working in the bike trade in the 1980s. Its really interesting to see the sheer variety of bikes available now. I've seen the transition from a period where only prestige racing bikes were on offer, then almost entirely mountain bikes, the birth of the 'hybrid' and the rise of city bikes and electric bikes. I hope that this variety is evidence that cycling really is becoming universal and not just for the enthusiast.

The end of september is the culmination of preparation for the Three Peaks cyclo cross race in the Yorkshire Dales. This year we were blessed with the best ever weather, sunshine and barely a whisper of wind, and fairly dry ground on the often boggy moorlands. For five years I have been trying to dip beneath the 5 hour time for this event, and finally achieved that. A good end to a great month of cycling! 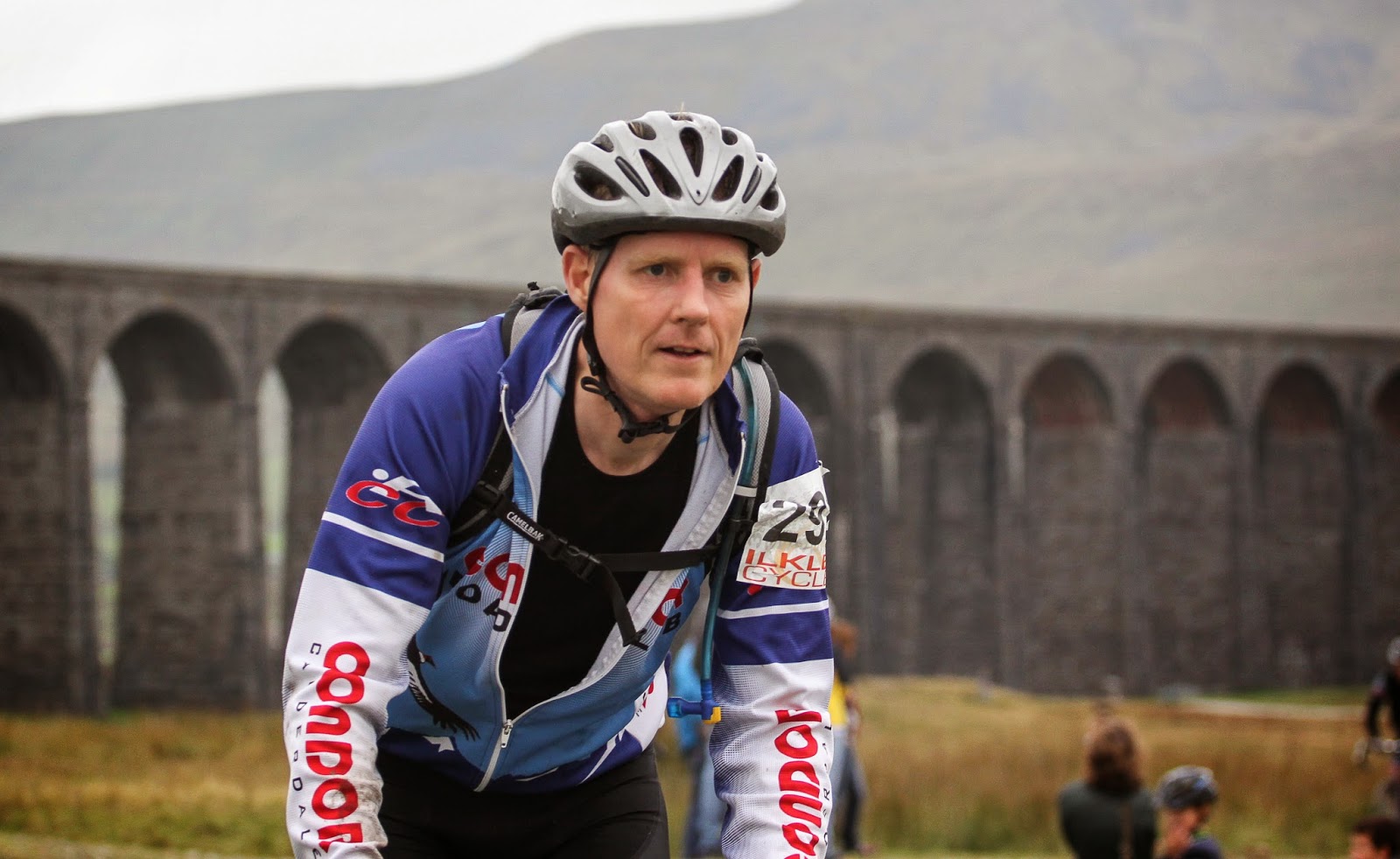