A few years ago I went to the Netherlands with the All Party Parliamentary Cycling Group, specifically to look at Bike-Rail integration. We were made very welcome by NedRail and the Dutch government, including a very fancy 'ambassador's reception' in the Hague, too posh for Ferrero Rocher even!

One of the MPs on the trip was Islington's Emily Thornberry. I spent quite a bit of time talking to her as we seemed to get on OK, and she was pretty 'ordinary' informal and unintimidating among the various distinguished peers on the trip. She certainly didn't strike me as a 'snob', quite the reverse, and from what I remember our conversation was about social justice, tackling inequality and of course, cycling.

But now she has been 'exposed' as a snob for apparently taking the piss out of  jingoistic (or proud English) flag waving white van man. There is no doubt that she should not have tweeted a photograph of one individual's house, because a white van and an English flag is not (and should not be) indicative of some UKIP/BNP football hooligan mentality. But everybody has assumed that is what was intended and she has lost her job. That is perhaps because 'white van man' has become synonymous with the sort of aggressive and inconsiderate behaviour that we witness on the roads (from drivers of all sorts of vehicles), and the English flag in particular has been appropriated by far right political groups and football fans to such an extent that the champagne socialist middle classes in Islington would feel uncomfortable displaying it on the basket of their city bicycle or hybrid Toyota Prius (see its easy to stereotype by mode of transport).  I know that white van man exists in the Netherlands, I was nearly knocked off in Amsterdam once by a Heineken delivery man trying to squeeeze past where there wasn't room, and a ride in a high speed Dutch taxi can also be exciting at times. I don't know however whether a particular mode of transport in the Netherlands such as white van man or the London cabbie, quite so clearly bestows the essence of  'salt of the earth' Dutch working man although of course the bicycle is seen as part of national identity. Inevitably, some journalists had to use the 'on yer bike' headline accompanied by a cycling picture as Emily Thornberry resigned.

Modes of transport seem to matter in UK politics. Drivers of cars are always 'beleagured' by those over zealous rules about speeding and parking, and 'the war on motorists' and are rewarded with tax breaks for vehicle manufacturing and a big investment in road building. Meanwhile the NHS struggles to meet the costs of the consequences of motoring associated with road crash deaths and injuries, air pollution, congestion and obesity, while parents are terrified to let their children venture out alone.  Margaret Thatcher reputedly had a thing about buses being for losers. Anybody successful would surely be in a car. ("A man who, beyond the age of 26, finds himself on a bus can count himself as a failure" - although there is no reliable source for this quote). When Labour launched its more balanced transport policy the image below was typical of the reception it received in the press, and almost 20 years later Britain (with the exception of parts of central London, Brighton and Bristol) still hasn't really moved on much from this social attitude. 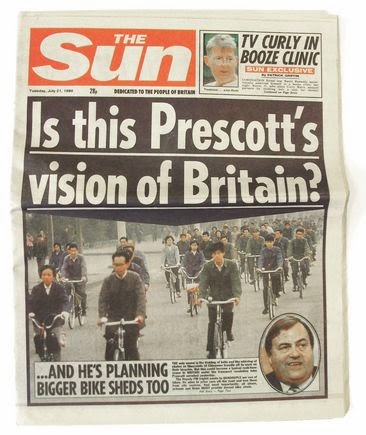 Former government Minister Andrew Mitchell was famously required to get off his bicycle and use the pedestrian exit from Downing Street, despite the fact that a bicycle is a 'vehicle' in law and should not be used on a footway, and he had used the vehicle exit on previous occasions. His argument with the Police cost him his job, as well as the jobs of some of the officers present. He wasn't the only stroppy cyclist however, Theresa Villiers (pictured) and Boris Johnson were among others for whom the police regularly opened the main gates although the official Police line is that the instruction is to open for cars only. 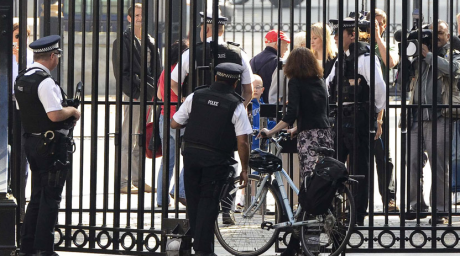 The Guardian reporting on Andrew Mitchell's unsuccessful Plebgate court case summed it up from the point of view of one of his former colleagues, the ex MP Michael Brown. "The reason that Ministers were given ministerial cars is so that they didn't get into this kind of mess. My main criticism of Andrew Mitchell is that all this Cameron bicycling nonesense is what got him into trouble."

It's often said that political and cultural attitudes have no impact on cycling and its all down to infrastructure.  I don't imagine that the bicycling royal family of the Netherlands or the many dutch politicians who cycle to work are required to get off their bikes when leaving the gates of their official buildings.