One hour in Halesowen, Copenhagen and Nantes

One of the great things about following bike racing is that you can ride the same roads and same venues as the stars, either alone or in amateur races and sportives. In the 1990s I took a few coach tours to watch the spring classics and Tour de France, riding the routes and watching the racing. So in 1993, when Chris Boardman was pounding the boards at Bordeaux to set a new hour record, I was on a coach in the Alps with a few other Yorkshire cyclists bound for Serre Chevalier to watch Le Tour and ride the Galibier and a few other giants.

I had no real knowledge of track racing until my kids joined Halesowen CC, one of Britain's most successful Go Ride clubs with over 100 young riders under 16. In recent years the club has spawned many national squad riders, many from 'non-cycling' families who have just become involved via friends or school activities.  Inevitably most of the parents become cyclists, doing social rides, riding cyclo-cross or getting involved in the track league or coaching and administration. I'm a firm believer that any involvement in cycling must make them more considerate and safer drivers, even though the majority don't treat cycling as everyday transport. As 70% of the economic benefits of cycling derive from health benefits, and only 20% of cycle trips are utility trips, we shouldn't dismiss the value of those cyclists who spend many hours each week training, racing and simply enjoying the countryside by bike.

My own contribution to the Halesowen club was to become involved in coaching, mainly track and cyclo cross, when my own experience was in road racing and time trials, but I learned quickly from others how to teach skills despite my limited ability to actual demonstrate them! My only aptitude in track racing was the pursuit, which suited my time trial background and so when I read 'The Hour' by Michael Hutchinson I began to wonder what it would be like. At 08:00 on the 11th May 2008, exactly 115 years to the day after Henri Desgrange set the first hour record of 35.325 km I set out to beat it. As Sean Kelly would say, 'I made the calculation' of what time I needed for each 400m circuit of the Halesowen track and stuck rigidly to that schedule. Despite a modern bike and tri-bars it was incredibly demanding to stick to the schedule. After 20 minutes my body was screaming for a break and I briefly dropped behind. Its not just the physical, but the mental pressure of watching the clock and constantly following the inside sprinters line for the fastest route around the track.  It wasn't until the last 10 minutes when I knew I had done it that I managed to speed up and gain a couple more laps to cover just over 36km, beating Desgrange but not good enough to beat the 1894 record of 38.2km. It was a modest achievement to match a record set a hundred years ago, probably on a cinder track and cast iron bike, but I still had to be lifted off my bike, stiff and exhausted from the effort of sitting in a fixed position for an hour.

I had thought I might try each month to get subsequent faster records but once was enough, so when Bradley Wiggins takes to the track this evening I will have some sympathy! 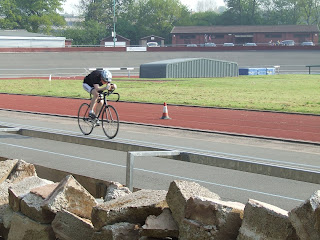 My employer Phil Jones Associates recently organised a study tour to Copenhagen and Malmo. The trip was attended by officials from the Department for Transport, Transport for London, Sustrans, Wheels for Wellbeing and British Cycling including my fellow former hour record holder, Chris Boardman.

We were welcomed to Copenhagen by Henriette Lund, a Danish consultant previously employed by TfL to help develop the Cycle Superhighways which are modelled on Danish routes. Copenhagen is an interesting comparison for UK planners and engineers as its urban form is much more like UK cities, with low density residential areas, shopping malls and out of town developments. Being a northern coastal city it is cold and damp for much of the year, so not the most conducive climate for cycling. Despite this, it is one of the world's leading cycling cities. 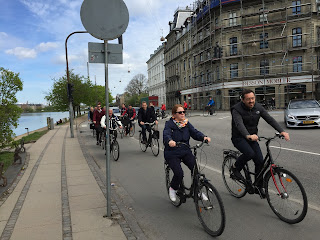 
The streets typically have 'hybrid' or stepped cycle tracks, one way tracks at half-height between the pavement and the road. Many of these tracks started out as cycle lanes, mostly achieved by removing on street car parking, and are currently being upgraded to tracks to offer greater physical separation.

However, unlike the Dutch, the Danish tracks often terminate at large signalised junctions. Cyclists rejoin the traffic in a 'mixing zone' which acts as both a cycle lane and a right turn lane (left in UK) for motor traffic.  Two laws reinforce behaviour to minimise the risk of 'hook' type accidents, one is the strict liability, that places the onus on drivers to prove they are not responsible if they hit a cyclist or pedestrian. The other is a 'universal duty to give way' so that drivers waiting to turn in and out of side roads are always obliged to wait for cyclists going straight on along a main road. While this is not always observed (one of our party was cut up by a white van man in the first 30 mins) in general this system makes for more relaxed cycling and is borne out by the high modal share of around 45% trips to work and education by bike across the greater Copenhagen area, which includes outlying settlements and suburbs, and 52% in the city centre. 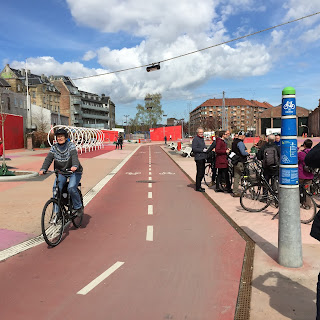 Superhighway through 'Red Square' in Copenhagen


The latest challenge for engineers is to 'speed up' cyclists with wider tracks in the city centre, new cycle bridges across water and rail barriers and a series of radial cycle superhighways extending to outlying towns and villages to cater for long distance cycle commuting. With a dispersed settlement pattern, cycle parking at rail stations is important, but equally the Danes provide cycle carriages on peak time suburban rail services and we had no problem taking 16 people and their bikes onto  a very busy train. 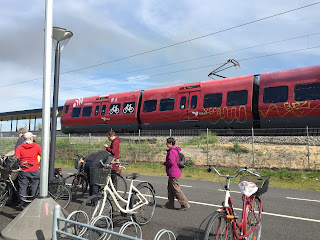 
Bus use in Copenhagen is also high compared to most cities in the Netherlands, here in Noordegaade a 'chicane' in the carriageway enables cycle tracks to be bent around the back of bus stop islands on either side of the road. 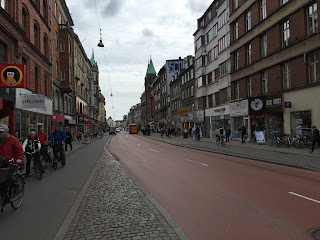 Last week I attended the VeloCity conference in Nantes. One of the hot topics of debate was how to translate the current enthusiasm and huge increase in participation in sports and leisure cycling into regular cycling for transport. It seems there are no easy answers, as always it takes time, commitment to quality infrastructure backed by encouragement, information and training. Just like everybody else, the MAMILs and MAWILs will only take to city cycling if they feel safe, have somewhere to lock their expensive bike, have confidence in waymarking to know that the cycle route will not suddenly disappear. 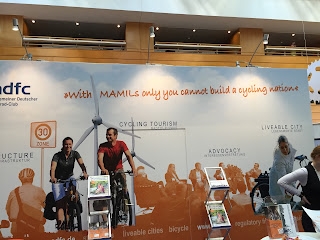 It is good to see that the UCI (cycle sport governing body) is taking the issue seriously, working with federations such as British Cycling to raise the profile of safe cycling and to use the carrot of hosting a major sporting event as a stick to lever commitment to everyday cycling from the local authorities. The question that inevitably followed however was that of how to foster 'one voice' for cycling rather than the separation of campaign, touring and sports organisations that typifies most countries.

One of the traditions of Velo-City is some kind of mass ride on the first evening of the conference. When I first attended in 1997, about a hundred of us pedalled around Barcelona, much to the bemusement of local people. In Nantes there were over 1500 delegates at the conference and at least as many local people involved in the 'Velo Parade', such that it took several hours to pedal around the city. There was some spectacular fancy dress (bikes and riders), and the participants ranged from 5 year olds on balance bikes through to pensioners who were well old enough to know better! Amazingly the ride was scheduled to start at 5:30 in the evening rush hour with several roads closed, but despite this most of the motorists caught up in the jams took it well and waved and smiled as we were quite an amusing spectacle. 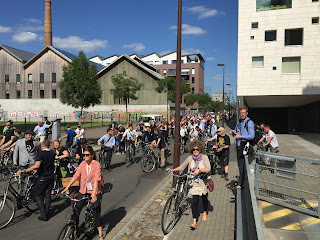 VeloCity delegates line up for the parade 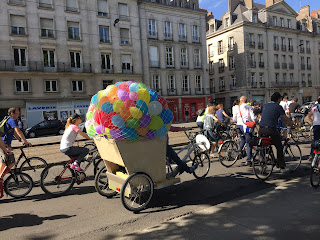 One feature of Nantes is central cycle tracks down the middle of the road instead of at the edges. These work well with fewer conflicts at side roads and with pedestrians and buses, although joining and leaving can be confusing at times and the combination of tram tracks, roads and cycle tracks makes crossing difficult for pedestrians (they are only supposed to cross at designated areas). Despite the drawbacks, its something that may be suitable for some dual carriageway and 'boulevard' style roads in the UK. The idea has already been adopted elsewhere in Washington DC and Barcelona. 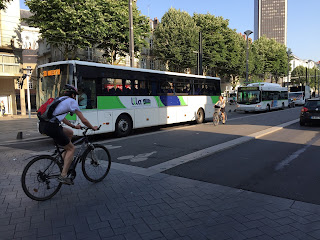 That's enough writing about cycling, time to don the lycra for my weekly MAMIL experience, but tomorrow I'll be on the folder for business. Vive le velo!

Posted by Lordonabike at 03:06 No comments: