I paid a visit to the Leeds-Bradford Cycle Superhighway today. Work started on site a couple of months ago and seems to be making good progress. I can't think of anything remotely like this anywhere else in Yorkshire and I know that its been a steep learning curve for everybody involved, both on the design side and the consultation.

There are two basic designs. One is a track at carriageway level with a solid dividing kerb to the carriageway, the other is a stepped cycle track at half-height between the footway and carriageway. Both elements appear to be about 1.8m to 2.0m wide and intended for one-way cycling in the same direction as the other traffic.

Here are a few photos. 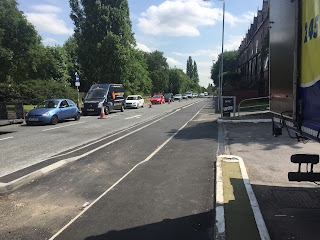 This is the track at carriageway level. 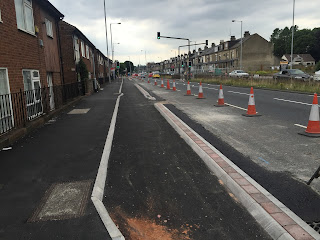 Here's an example of the stepped version. 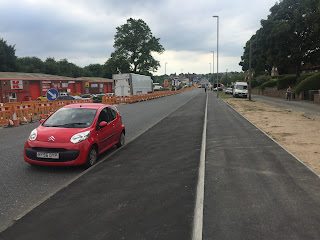 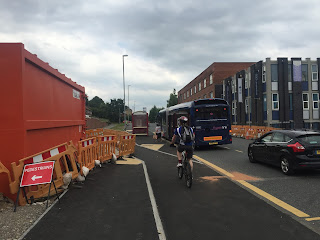 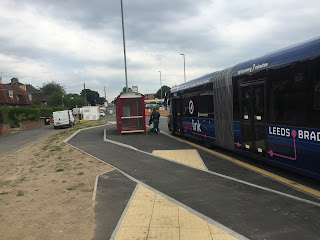 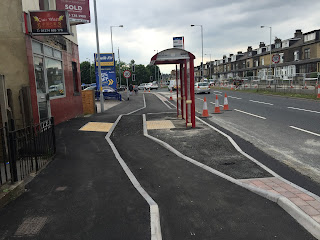 The junctions are a bit of a weakness. One junction appears to be using a toucan crossing for the straight ahead movement. Hopefully there will still be an advanced stop line to choose to remain on carriageway or use the toucan. 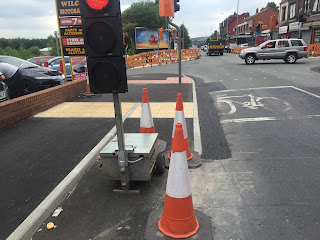 The Leeds ring road crossing has been in place for some time. Going west it works reasonably well but the left turn slip is often running when the first two signals are green for cyclists. Its easy to get caught out and carry on into the moving traffic. If you have to stop there is no room for more than one bike and you stop with your back to the traffic. Hopefully this will all be modified. As well as safety you typically get held for about 45 seconds at each light. Its not long but it seems like ages. 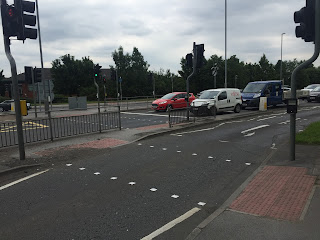 ASt the next junction there is a new crossing arrangement with dedicated cycle phases - but similar issues! 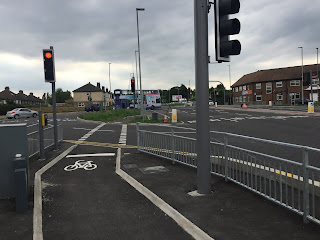 There's a 45 second wait at this signal at the junction entry! Closely followed by this one at the exit! 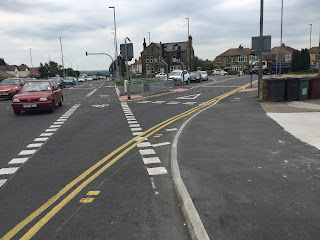 Once again the left turn is not controlled so a cyclist gets a green signal at the same time as cars may be coming out. The cars have also passed a green light at the pedestrian crossing to get to here so they may not be anticipating opposing traffic on the main road. 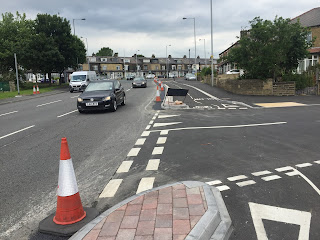 This one raised a few comments on twitter but I'm with the designers. I wouldn't feel safe here if the cycle track had priority, there is loads of lane changing going on in the gyratory, the speeds are high and there's a high proportion of HGVs. 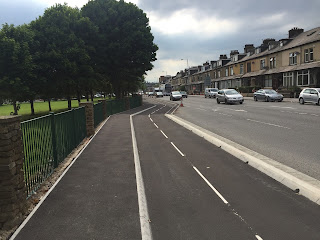 Toucan crossings and two-way tracks mean that cyclists get a shorter and more direct route than other traffic at this gyratory. 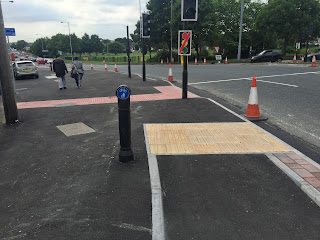 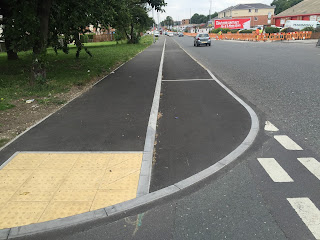 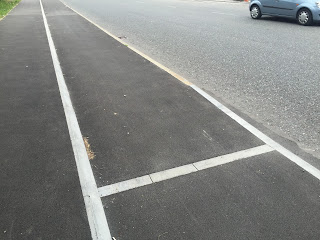 The transitions from segregated to shared areas and on and off carriageway are nicely handled. Its hard to see in the picture but there is no upstand at this kerb and the ramp up to cycle track level is very gentle. 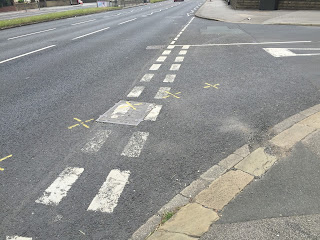 The yellow crosses show how the cycle track is taken from footway and carriageway space, and how much tighter the geometry at side roads becomes, slowing down the turning traffic to make crossing safer. 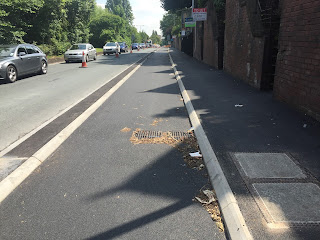 Drainage is doubled up on sections where there is a gap in the separating margin for water from the carriageway to run off. 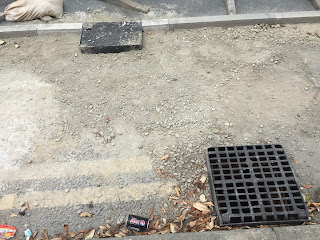 Elsewhere, kerb face drainage feeds back to the gulley at the original kerbline. Note the square grid cover is more bike wheel friendly. 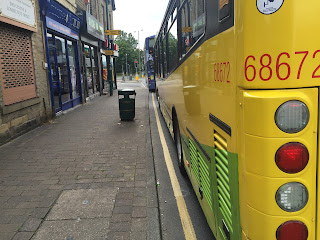 I'll be glad when they get to this bit!


Posted by Lordonabike at 15:39 No comments: