The 'social season' is a magical time for cycling in England. While summer has its long days and sunshine, there is something special about the winter. Frequently cold, windy, wet and dark, but still special.

I started cycling with a club when I was 14 or 15, in the early 1980s when our heroes were the 'hard men', Sean Kelly and Bernard Hinault. We were in no doubt that they would be clocking up the winter miles. Asked if the weather was ever too bad to go out training, Kelly replied "I go out and then when I get back I decide if it was too bad or not." 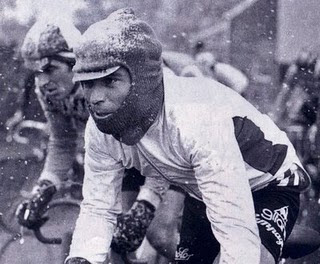 There was no club in my home town of Hebden Bridge, so it was almost always a solo 10 miles to start and finish the day, either along the Calder Valley or up over the lonely moors above Oxenhope. This is the story of a typical day.

In the silent early morning light I pedal down the valley to the rendezvous, along deserted roads with only the occasional bloke out to buy the morning paper or walk the dog. Although its light, the day has the kind of flat, grey lack of contrast when the sun has woken up but chosen to stay under a thick cloudy duvet.

A 9:00 start inevitably stretches until at least 15 minutes past. Arrangements and promises made after several pints the night before are sketchily remembered. 'I'm sure he said he was coming, but then he got talking to a lass.'...... A straggler turns up, out of breath. Ribald comments about his whereabouts the night before. I notice that his jersey is steaming on his back, like a racehorse in the winter chill.

On this occasion we're making a short run to the south and east of Yorkshire. It's not the picture postcard Dales, its pits and power stations, but it's flatter, easier cycling. Two of our number are miners. One, an ex-miner now, has a roly-poly stomach and the tell-tale 'wheeze' of a life underground, and is nicknamed 'Puffing Billy'. The other, still (just about) clinging onto his profession and earning decent money is a small wiry bloke. He always claims his job in the pit is to 'Lig abaht' (lie around) on a shelf cut in the rock at a junction on the underground line to make sure the coal trucks don't get derailed. I never did find out if this was true!

We climb out of the Calder Valley and through the historic parklands of Nostell Priory. First stop is a transport cafe, somewhere south east of Wakefield. There's a different type of Yorkshire accent in south Yorkshire, harder and broader than in West Yorkshire. The woman behind the counter has 'SHAFT' tattooed on her knuckles - more ribald comments, some of which I (an innocent 15 year old) don't understand! However, she is a scary-tough looking woman with short bleached hair, so the banter is subdued! Once again I'm amazed by how much food a bunch of skinny cyclists can put away. It's all bacon butties and beans washed down with gallons of tea - no scientific diets and designer coffee for us!

We saddle up for the second-half of the morning. I'm still a newbie so I never know quite where we are going, but every week follows the same pattern. The pace starts to pick up at about 12:00 and that signals that we're about half an hour from the pub. There's some final jostling for position and an ad-hoc sprint for the village sign, and then lunch. Which is often 'liquid'. While the 'grown ups' down as many pints as they can before Sunday closing at 2:00, we younger ones drift back outside after we've eaten. Someone has a tennis ball. We play wall-ball and then football, and then have a quick 'circuit race' around the village, or we hang about talking about the things that 15 year-olds talk about.

On that subject, we are an exclusively male bunch. The only female cyclists I ever see in our part of the world are World Champion Mandy Jones, Julie Earnshaw - a Tour Feminin rider, and Lisa Brambani - a good looking youngster already on the national squad. There's also the legendary Beryl Burton, but I only ever see her at time trials - and she's off with the favoured riders while I start very early in the morning with the no-hopers. The next summer I meet a French cycle tourist and spend a day in the Dales with her, making a total of five women I have seen cycling!

Our leaders emerge from the pub. Everyone is a bit merry. We set off back, across the flat-lands passing cloud-belching cooling towers and whirring pit heads.  A kestrel is hunting along the edges of one of the slag heaps, and winter starlings are lined up along the telephone wires. There's no wind and we bowl along effortlessly. Someone rides alongside, flapping his 'wings' like a Condor - the name of our club, its motif stamped on our chests.  Soon we're all at it, swooping along the road, arms outstretched. It's not long until nature calls and there's an unscheduled stop. We're barely off again when someone has a mechanical. It's just a chain off so we ride on slowly for him to catch up, but then somebody decides we'll hide. We slip through a gate and hide behind the hedge, while he rides past, looking for us on the road ahead. Then we quietly remount and slowly catch him up - but he's going faster and faster, still thinking we're ahead. By now we're just a few yards behind him. Somebody sniggers and the game is up. 'You bloody daft buggers!' he shouts. Angry at being made to look a fool.

There's another stop, but this time we pass through some gates, which are padlocked by a chain just wide enough to get a person and bike through. We're on a big tarmac drive through a country house estate. Somebody tells me the history of the place. A wealthy noble family was stupid enough to mine underneath their own home which is now abandoned, cracking and crumbling with subsidence. A herd of deer is grazing in the distance. It is completely still and quiet, just the swish of our tyres as we scurry on through. 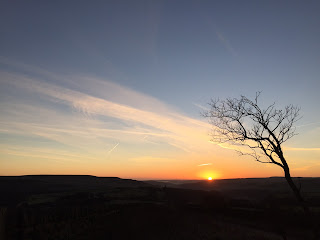 Its already starting to get dark on this short winter day, and our lights are switched on. My winter bike is kitted out with a dynamo. I have put a bigger bulb in the back light, because the standard dynamo bulbs always 'pop' when going down the steep hills of Yorkshire. Now, the faster I go downhill, the brighter the light. The whirr of the dynamo wheel is a comfort in the dark, but also puts a bit extra drag onto tired legs. Every so often, a friendly hand rests on my back and gives me a push to keep me in the bunch.

As we get nearer to Calderdale, people peel off towards their homes. I can smell Sunday dinners and coal fires. The smells and warm glow from the houses seems to emphasise the cold and dark outside. I tick off the valley landmarks and mill towns: Ravensthorpe, Cooper Bridge, Brighouse, Elland, Sowerby Bridge and then a steep kick up towards the main road, and finally back to Hebden Bridge. Its been a great day but its always nice to be back home out of the elements.