These notes are for the stakeholder site vist. The Cycle Ambition bid and the City Centre Cycling Strategy recognised that there are two quite clear corridors that form a 'cross' in the city.

South to North Route into the City Centre
The first is that almost all cyclists entering the city centre from the south are funnelled into Hurst St and Hill St and up to Victoria Square. Much of this route is earmarked for public realm improvements as part of the planning gain from New St station redevelopment. It is also affected by the Metro extension which cyclists must cross.  The existing northbound central cycle lane feeder to the advanced stop line at Smallbrook Queensway was designed when almost all motor traffic went left or right and only cycles and taxis and a small number of vehicles went ahead up Hill St. A safer option would be to keep cyclists on the nearside and give them a phase to cross Smallbrook Queensway at the same time as pedestrians (similar to the contraflow on the opposite side), but this would mean cyclists experiencing similar delays to what currently happens on the southbound contraflow.

North to South Route into the City Centre

There is a similar, but less obvious route that could in future be promoted from the north via Newhall St. This would however require a short section of contraflow including works to the signalled junction at Colmore Row. Could these signals be removed and replaced with a table top junction and some zebra crossings for example?

The route would continue south onto Bennetts Hill down to New St station and out to Hill St via Stephenson St. Normally one-way, Bennetts Hill has been operating as a two-way street for the last few months during works on neighbouring Temple St. At present we have drawn up options for segregated and unsegregated contraflow - bearing in mind this is access only and will be 20mph it shouldnt really require major infrastructure. 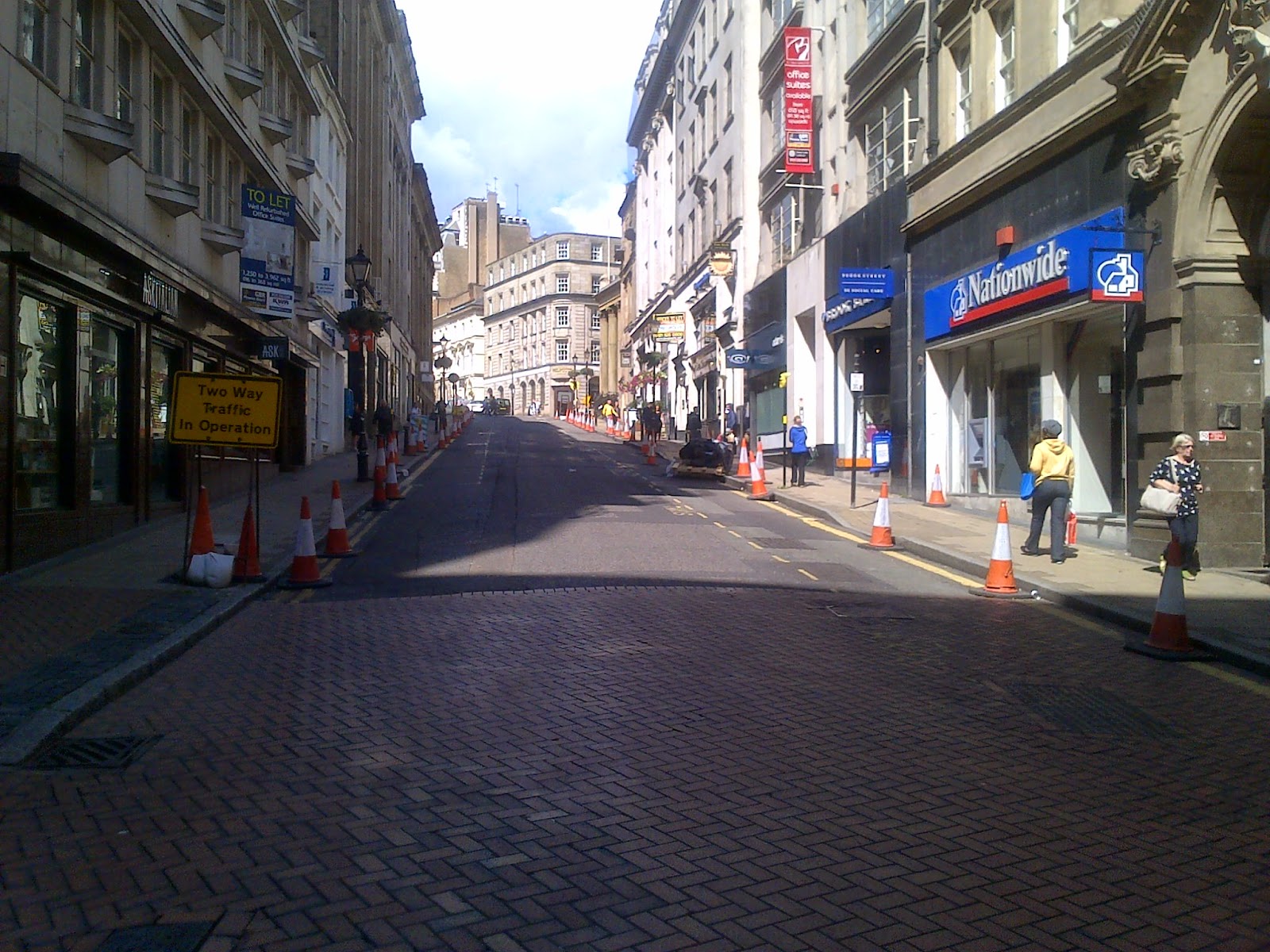 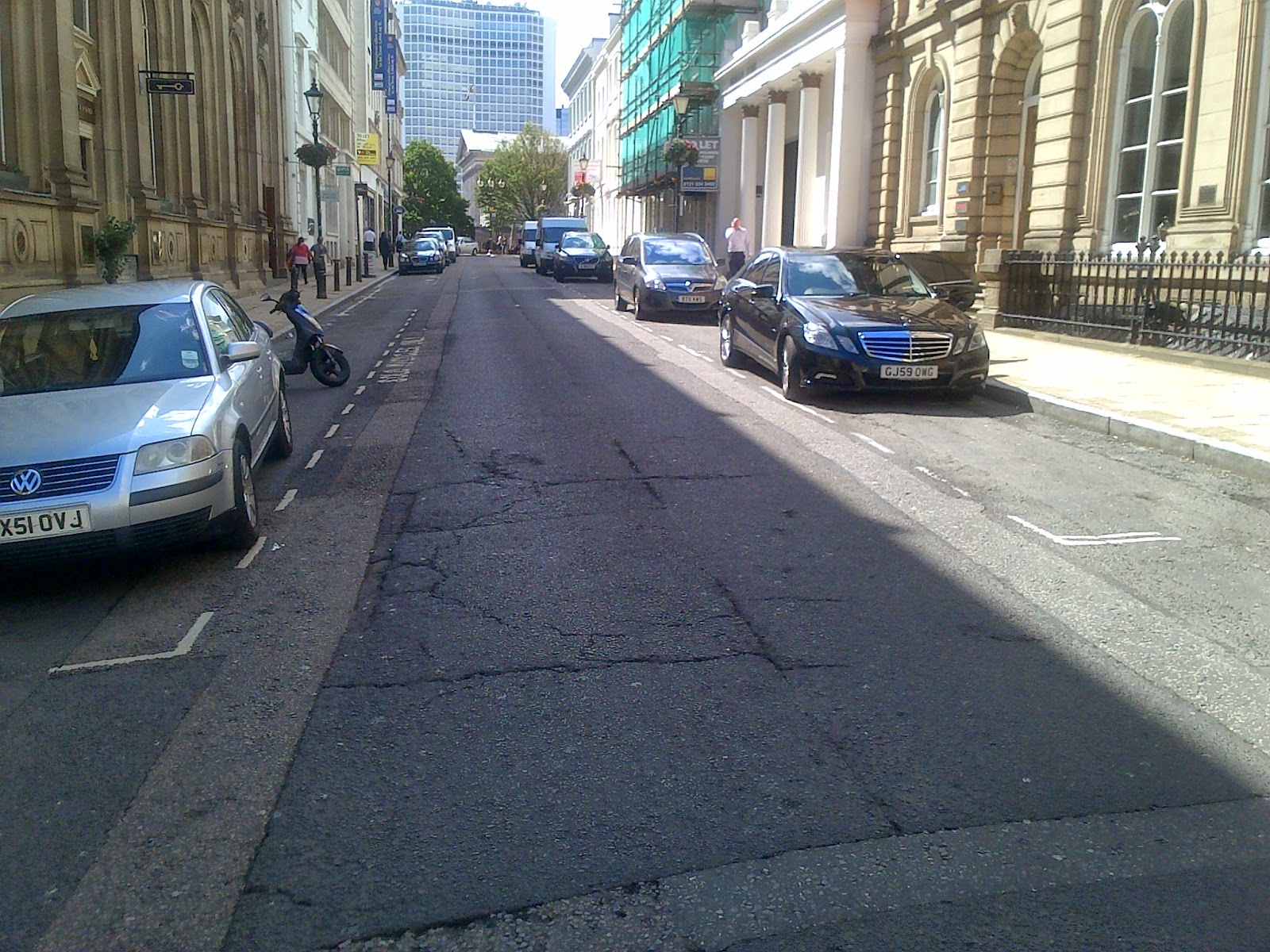 
West to East Route across the City Centre
The obvious route is from Five Ways along Broad St. Broad St is not part of Cycle Ambition grant due to construction of Metro in next few years. A 'parallel' route linking Five Ways to Holliday St is therefore included.  There is a discontinuity at Paradise Forum (to be addressed in the Paradise Circus redevelopment) and then its necessary to go along Waterloo St, Temple Row, Bull St and Corporation St to Lancaster Circus. This is a straightforward route if you know it but with frequent changes of direction its far from obvious.  What is the best way to show these routes within a busy city centre?

East to West Route across the City Centre
A number of routes converge at Lancaster Circus. From here the only westbound routes are either around the Queensway (see previous notes) or via Steelhouse Lane. The route from the subway onto Steelhouse Lane is very poorly defined and appears to cross the hospital entrance. There is a temporary discontinuity at Colmore Circus but again the route through the pedestriansed section is unclear. Colmore Row then continues to Victoria Square, Paradise Circus and onwards towards  Broad St via Centenary Square. As with the eastbound route, this is a logical 'straight line' route but difficult to follow on the ground and would not really function if cycling levels were to increase as there would be too much pedestrian/cycle conflict.