Introduction
Please note that any 'proposals' or 'potential routes' mentioned in this note will be subject to any constraints identified in the design development and subject to the outcomes of a full public consultation process. The word 'proposal' therefore refers to the ideas for a cycle route network that were set out in Birmingham's Cycle Ambition Bid.

Looking at movements around the Queensway
The site visit notes refer to potential and existing cycle routes around the Queensway and Park Street between St Chads Circus near Snow Hill and Moor St Queensway. These connections are largely on wide shared footways, typically the footway width is between 3.0m and 6.0m. Most of the footways are surfaced with concrete paving slabs. There are a number of generic issues to be considered:

St Chads Circus Connections: This area connects routes coming in along Soho Road at Constitution Hill plus a parallel route from Newtown that enters via Summer Lane and an access to the canal towpath. For the most confident fast cyclists coming from Soho Road, Snow Hill Queensway leads straight into the city centre and is now closed to traffic except bus, taxi and cycles but the gradient and road width at the multi-lane junction is challenging and not a safe environment to mix with motor traffic, so doesn't presently cater for most people. There is also a signed cycle route on Lionel St off Constitution Hill that leads towards Paradise Circus.  As part of the Birmingham Cycle Revolution (BCR) canal route works, the link from the canal towpath access at Cliveland St to the subways under the Queensway at Little Shadwell St (in the 'Gun Quarter') and Loveday St (leading to Lancaster Circus) will be signed.  The subway by little Shadwell St provides a grade separated crossing of Queensway and access to Steelhouse Lane via Whitall St, leading towards the Childrens hospital and Law Courts. 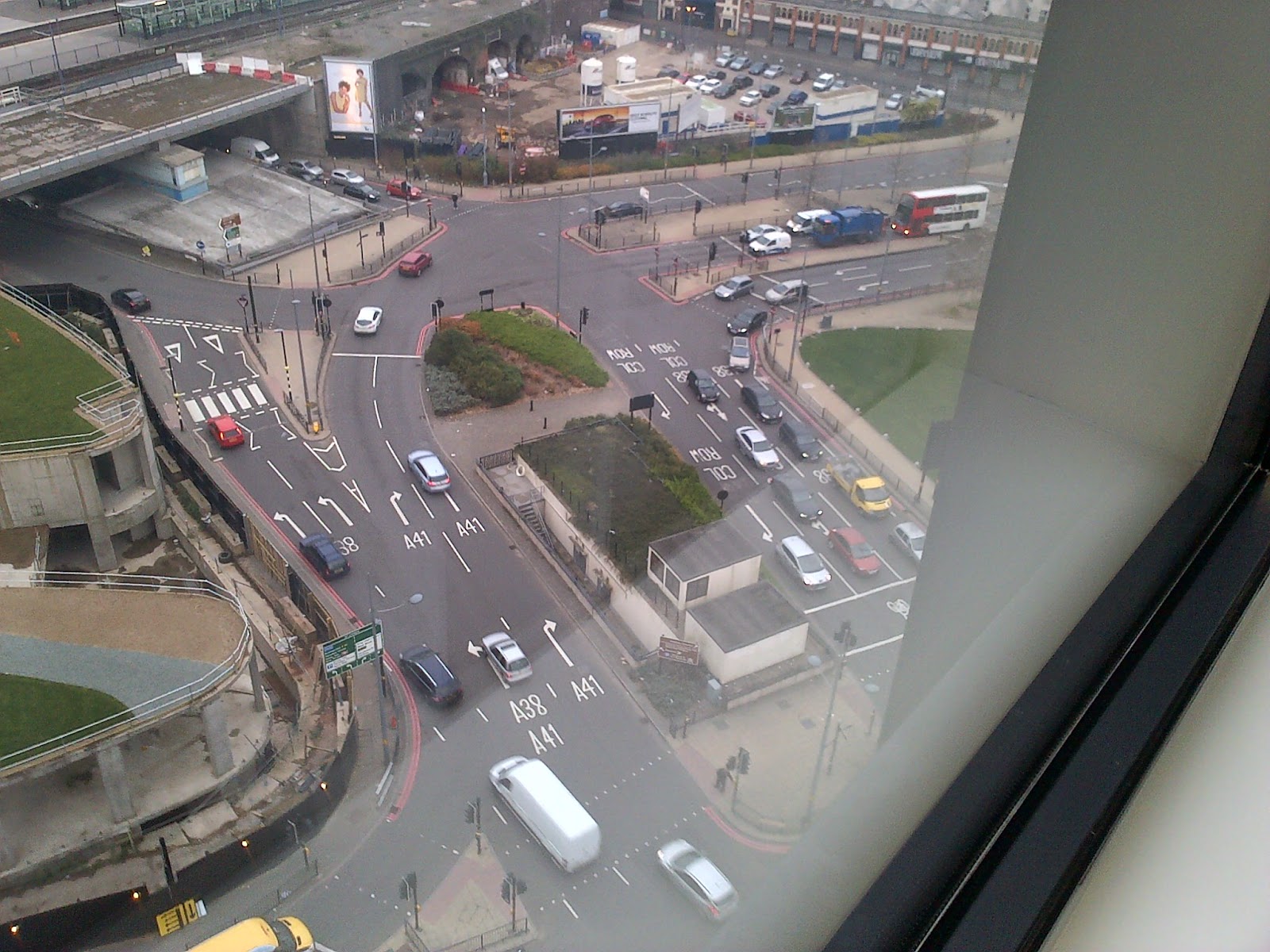 St Chads Circus requires cyclists to cross two lanes of traffic to go from Constitution Hill into the city and vice versa.
It would make sense to permit shared use on all of the wide footways between Lionel St, St Chads circus, and Lancaster Circus to offer connections between all of the routes and local attractors. The area between St Chads and Lancaster Circus is generally not busy with pedestrians although there are two hotels, the Salvation Army Hostel and St Chads Cathedral all of which generate some pedestrian traffic throughout the day. The main issue in this section therefore is less about managing conflicts and more about making coherent routes and waymarking that is easy for pedestrians and cyclists to follow. Street furniture effectively halves the width of the available footway in places, and there is a bus stand layby (not a bus stop). A 'half height' or hybrid cycle track could be constructed here if street furniture was moved, but this may be more tempting for drivers to use as a place to stop, and would need to be discontinued and revert to shared surface by the subways and other localised narrowings. This arrangement could add significantly to street clutter and maintenance costs in terms of additional signs and tactile paving compared to a simple shared footway. 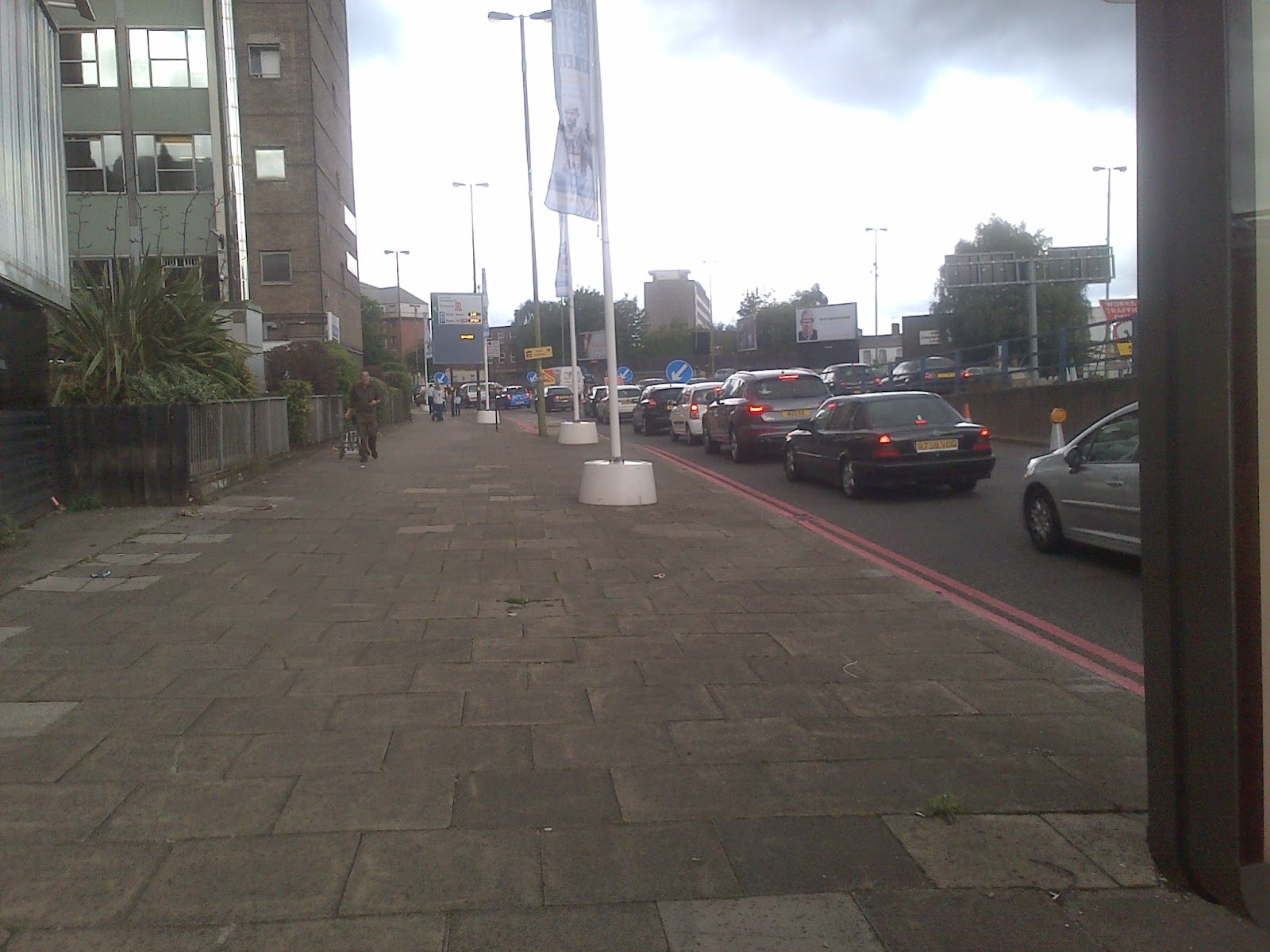 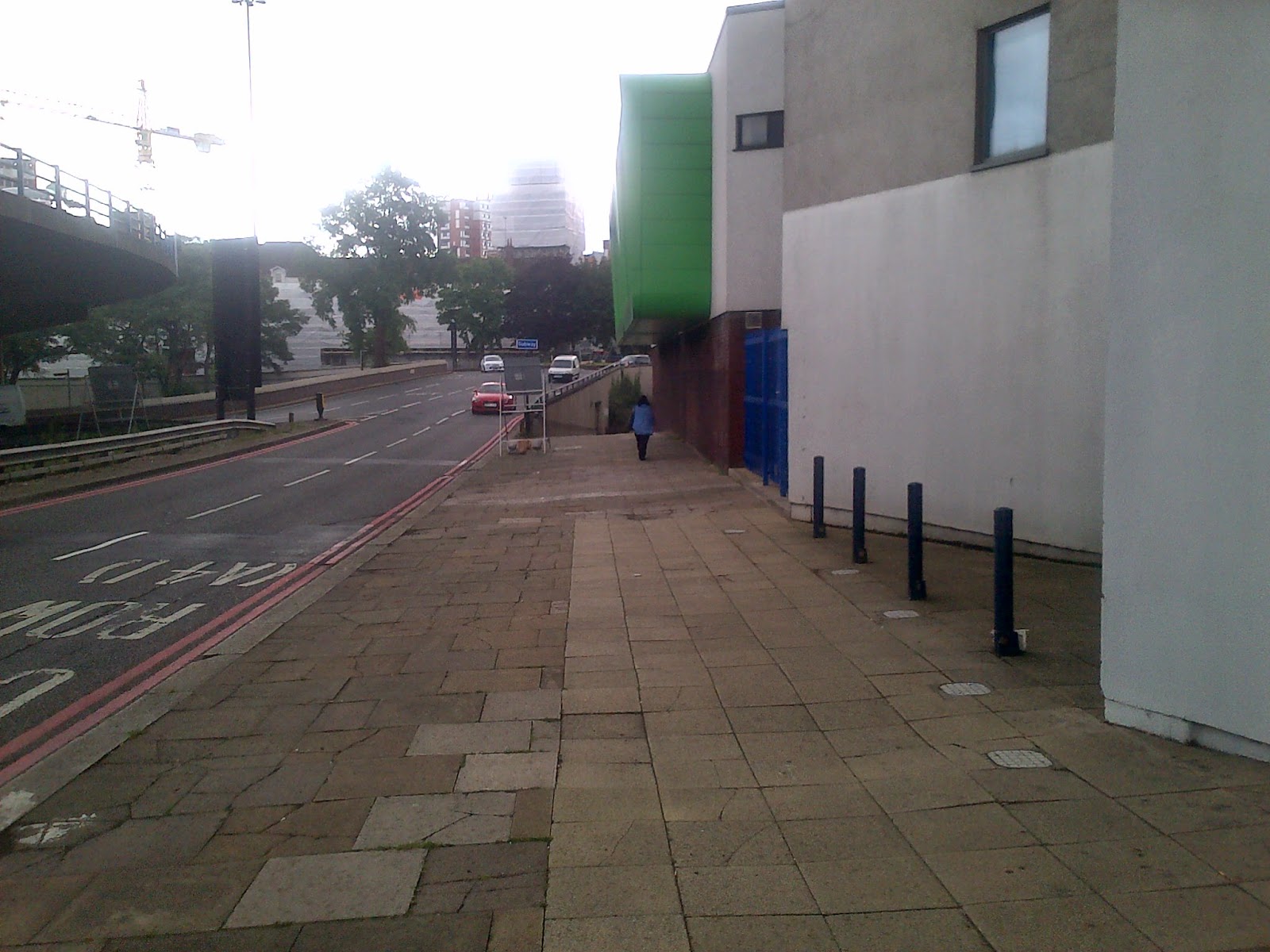 Footway width reduces on the approach to Lancaster Circus subway although none of the adjacent buildings has entrances onto this footway.
Lancaster Circus Connections: Lancaster Circus forms a 'gateway' to the city centre for pedestrians and cyclists by providing grade separation at the intersection of the A38, A34 and the Queensway. Links to the canal towpath at Newtown Row and Corporation St are being improved as part of BCR. There is some existing provision for cyclists along the A34 Newtown Row in the form of shared footway, cycle lanes and bus lanes and a toucan crossing. Routes along Corporation St are proposed to be improved as part of the BCR 'Lichfield Road' corridor. A 'parallel' route is proposed to come into the city via Lister St and through the Aston campus to Aston St. The proposed main cross-city centre cycle route towards Paradise Circus and Broad St uses Steelhouse Lane (and Corporation St for the reverse).  There is an existing busy toucan crossing of James Watt Queensway (from BCU to Steelhouse Lane).

Issues to consider around Lancaster Circus and James Watt Queensway: 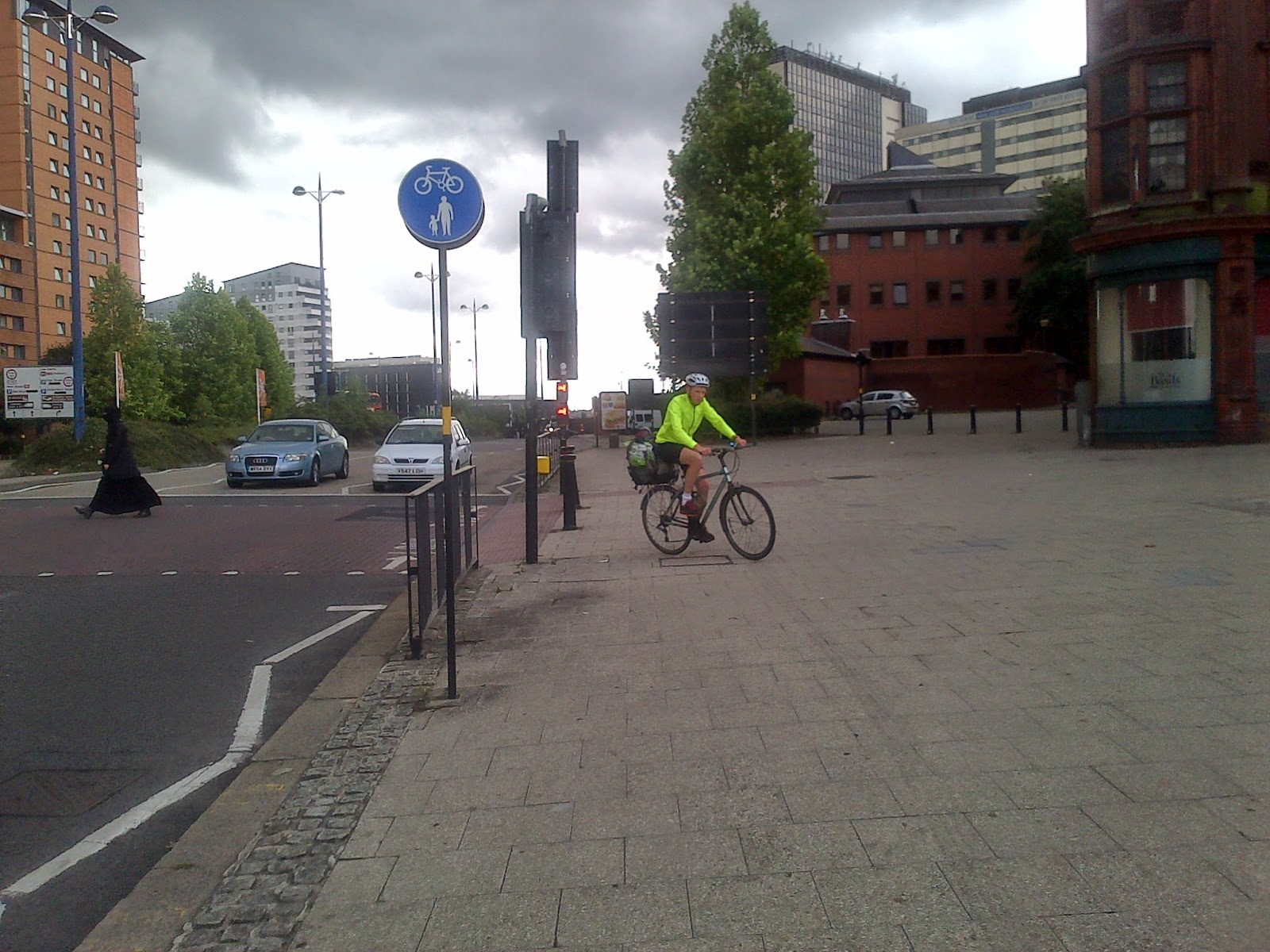 This toucan crossing at James Watt Queensway near Steelhouse Lane and Corporation St is often busy with pedestrians and cyclists in term time. Further along towards Dale End, there is a lot of street furniture and an unused bus layby, and the shared surface terminates with no connection into Dale End. There is no priority for pedestrians and cyclists at the exit from Corporation St onto the Queensway although the flows probably significantly outnumber motor traffic.
Dale End to Jennens Road and Curzon St Connections: Dale End leads to the High St shopping area of the city centre. There is an entrance to the University campus (Coleshill St) with a toucan crossing of the Queensway immediately south-east of Dale End. The main road route to Nechells Parkway starts at Jennens Road. It is proposed to upgrade crossings of the ring road around Curzon Circle to toucan crossings and to improve links to Landor St as parts of the parallel route network. there is a link to the canal towpath off Curzon St. There is a shared pedestrian/cycle path in Eastside Park leading to Curzon St and existing toucan crossing of Park St.

Issues to consider in this section: 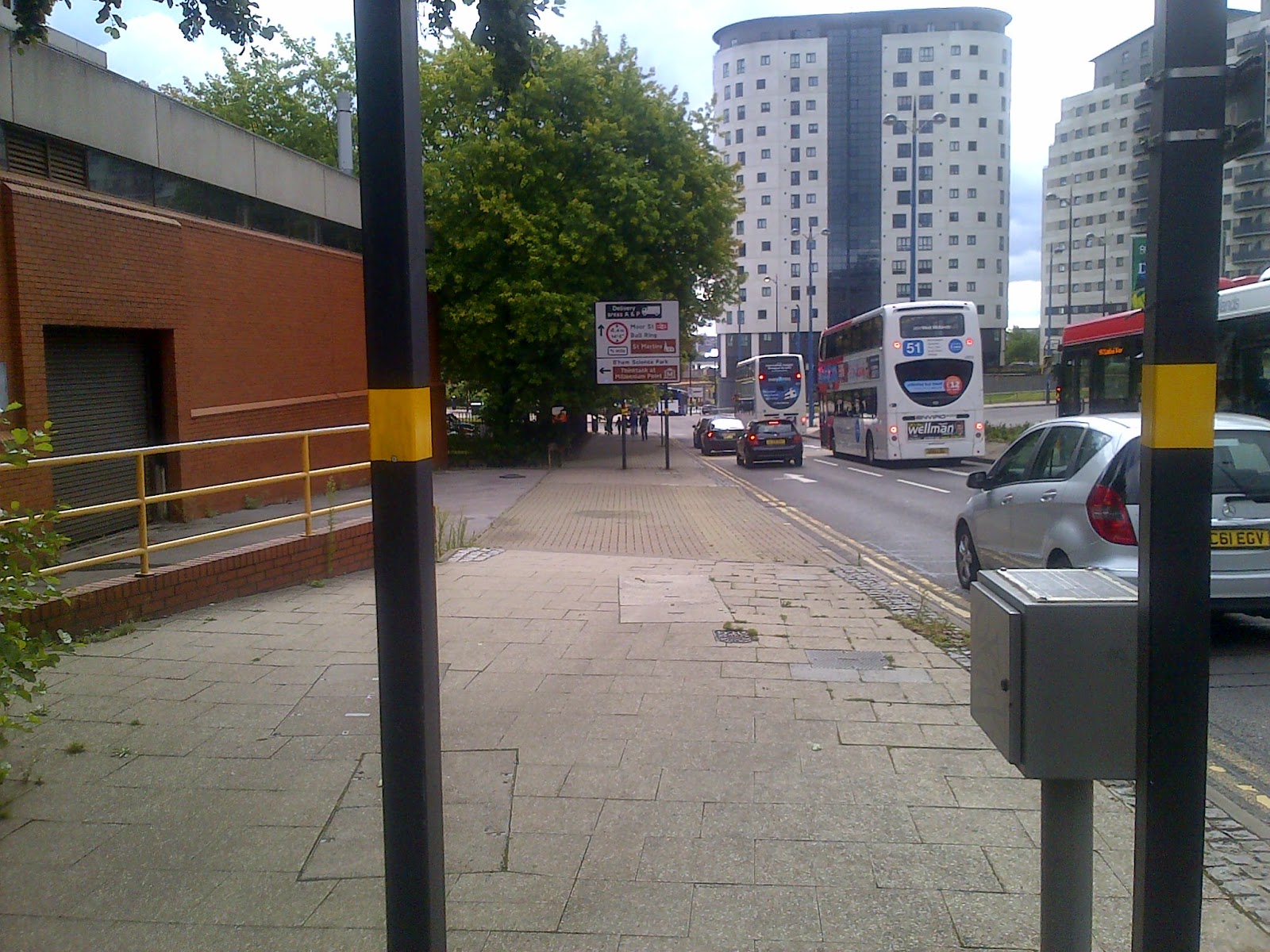 The shared footway from James Watt Queensway to Jennens Road has lots of sign poles. The number of cable ducts visible in the photograph may indicate that construction of a new path to provide dedicated space for cycling could be expensive. 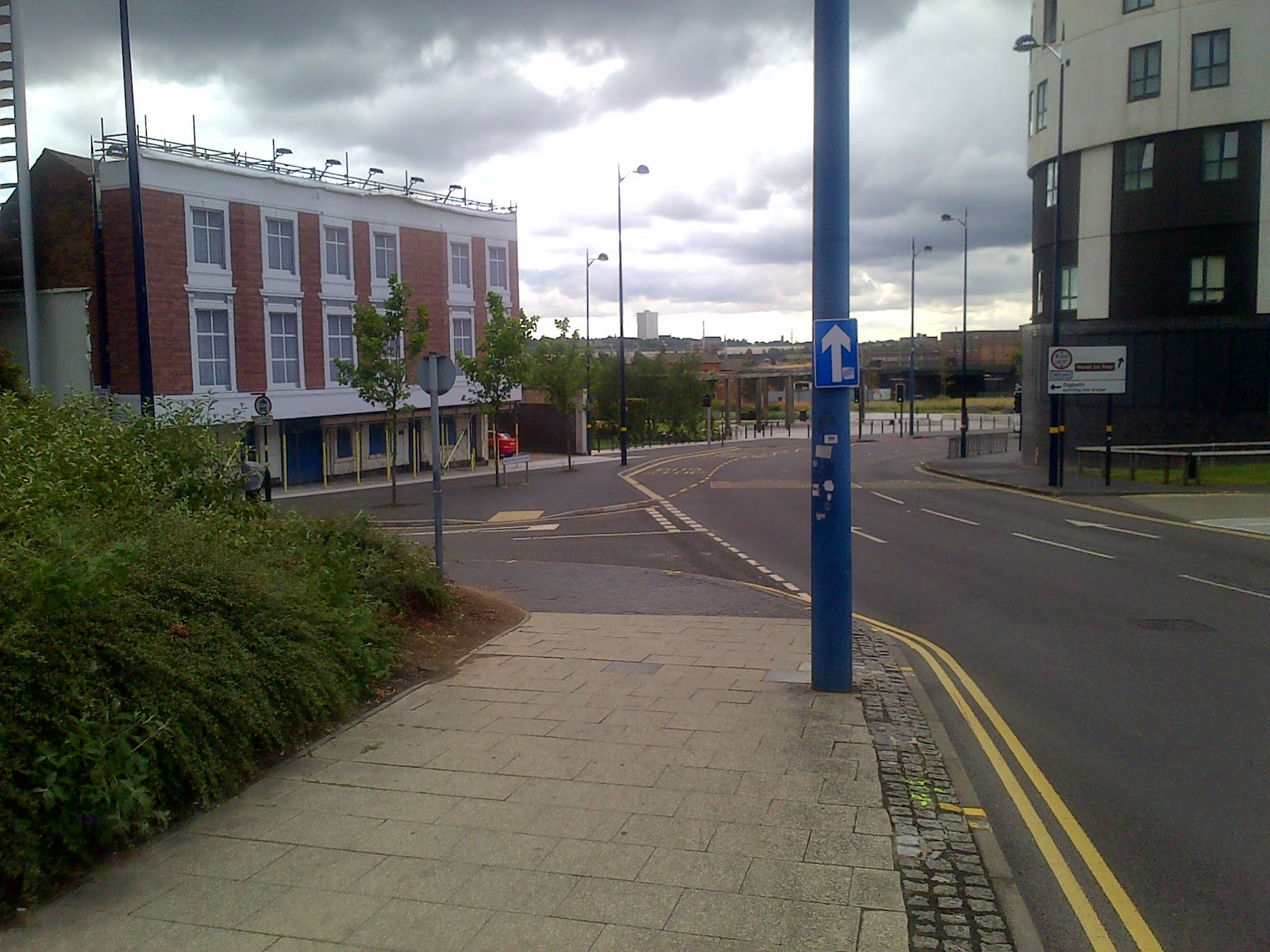 A 'gap' in the shared footway between Jennens Road and Eastside Park. 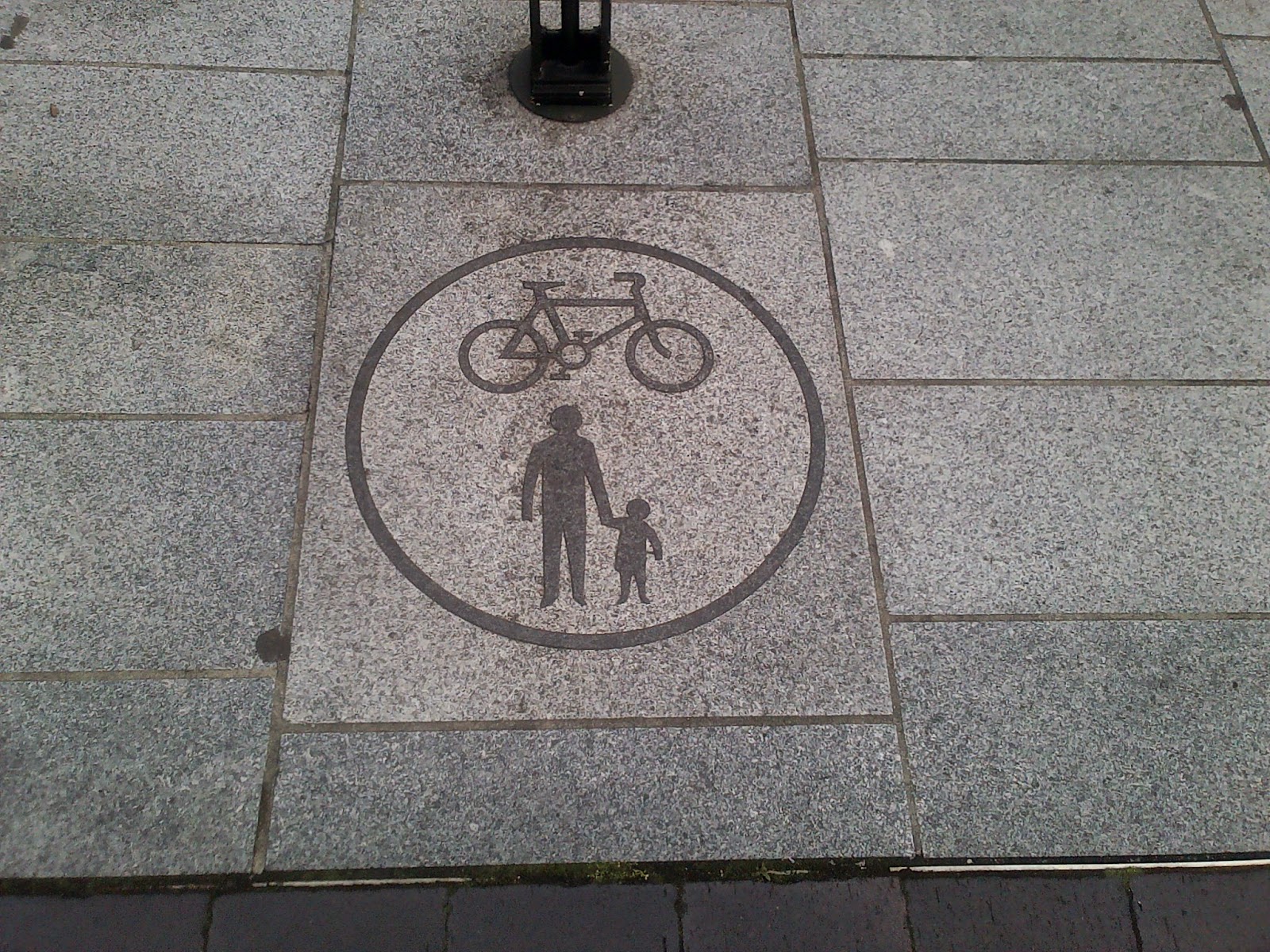 Park Street to Moor St Queensway Connections: The cycle route from Eastside Park continues over Park St on a toucan crossing, crosses Masshouse Lane and round in front of La Tour hotel up the pedestrianised section of Albert St to link to Moor St Queensway.  There are toucan crossings on Moor St Queensway, one between Albert St and Masshouse Lane and one just west of Albert St. Albert St leads to the High St and Bullring shopping centre. Signed cycle routes from Digbeth enter the city centre at Fazeley St (includes the Ward End Route, links to Bordesley, the Stratford Road Parallel and links to the Rea Valley route via Digbeth). there is also a link to the Grand Union Canal towpath.  Moor St station, New St station and the proposed HS2 terminal at Curzon St are all in the vicinity.

Issues to consider in this section: 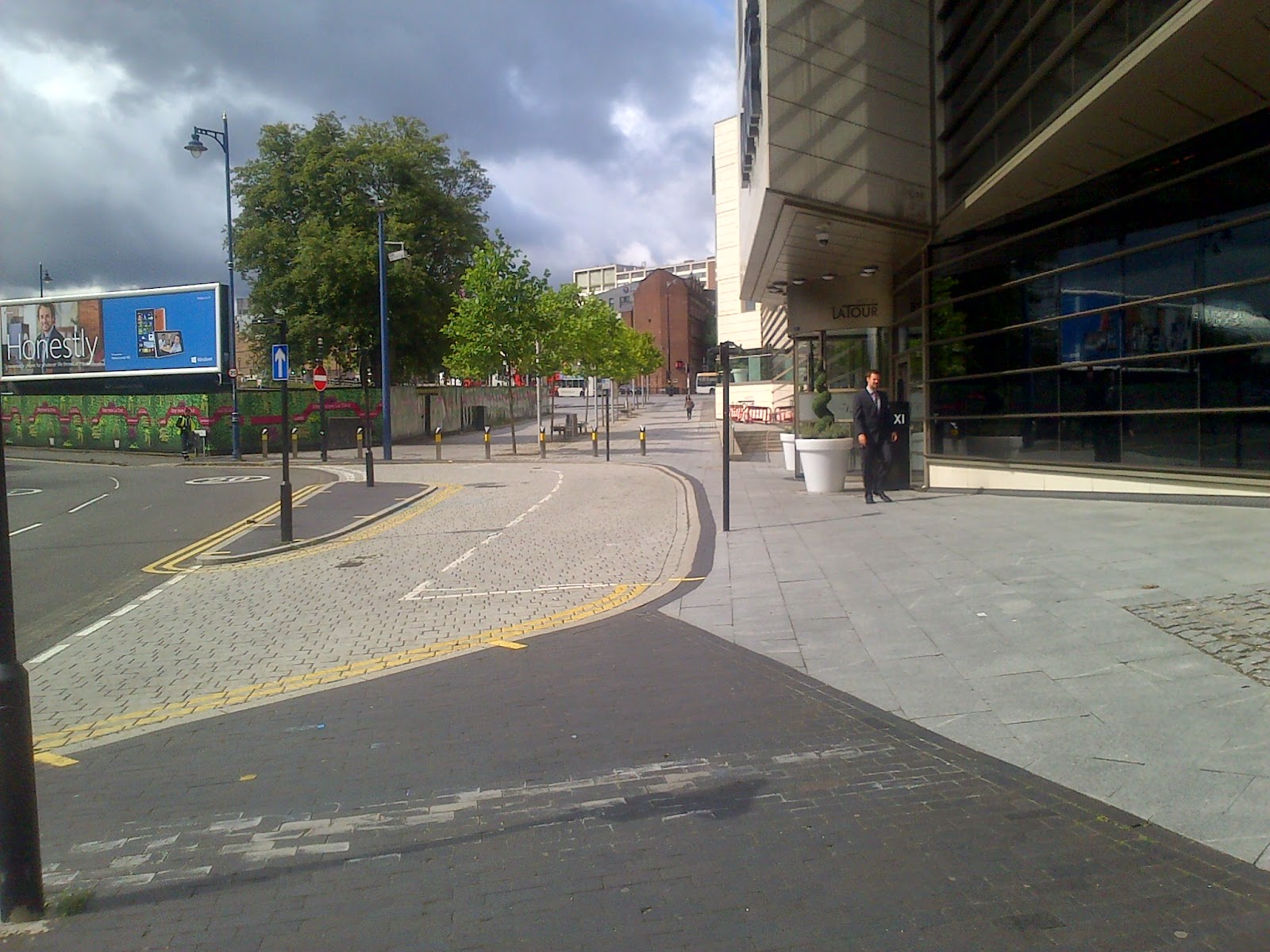 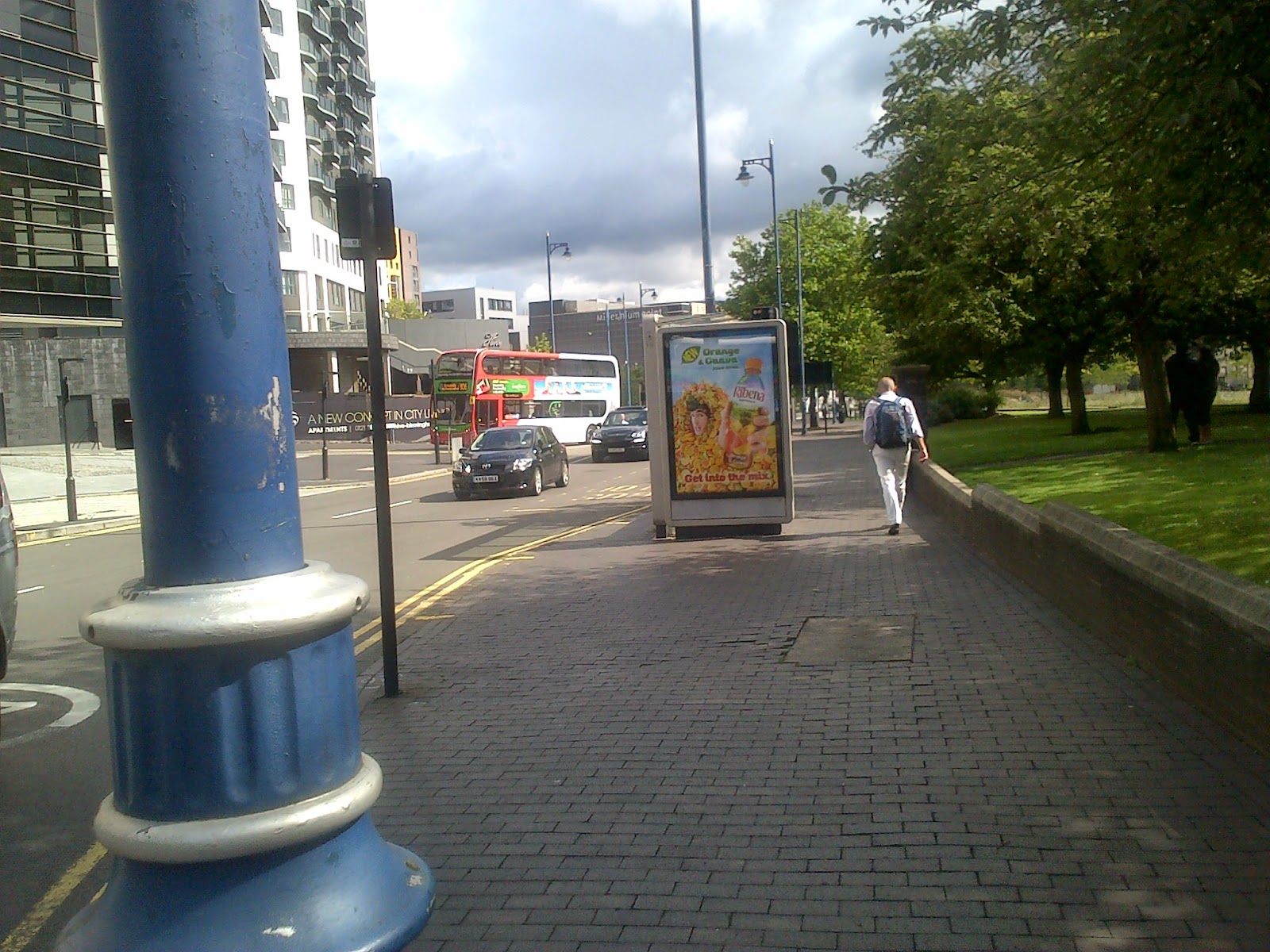 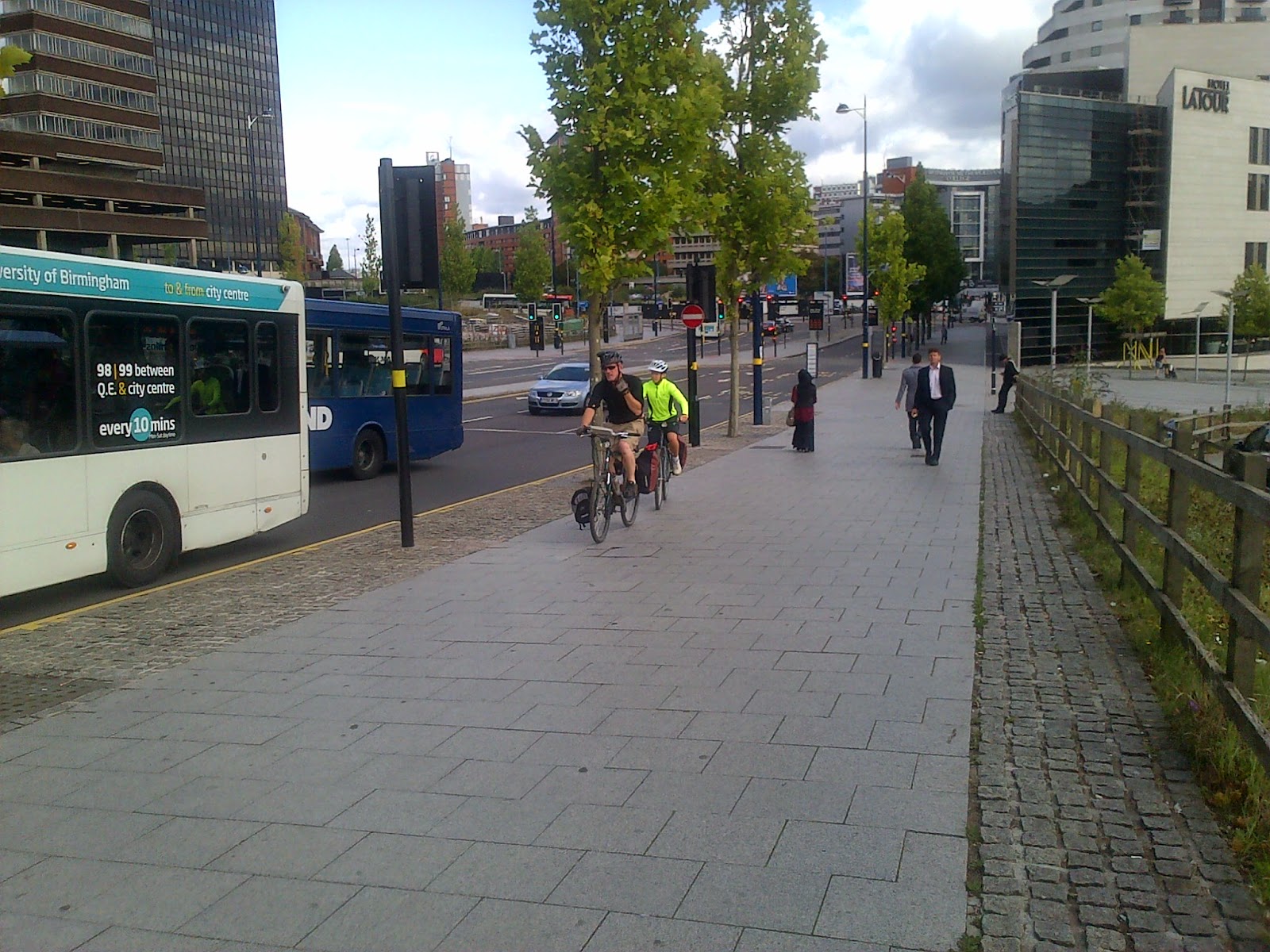 No defined space for cyclists along Moor St Queensway 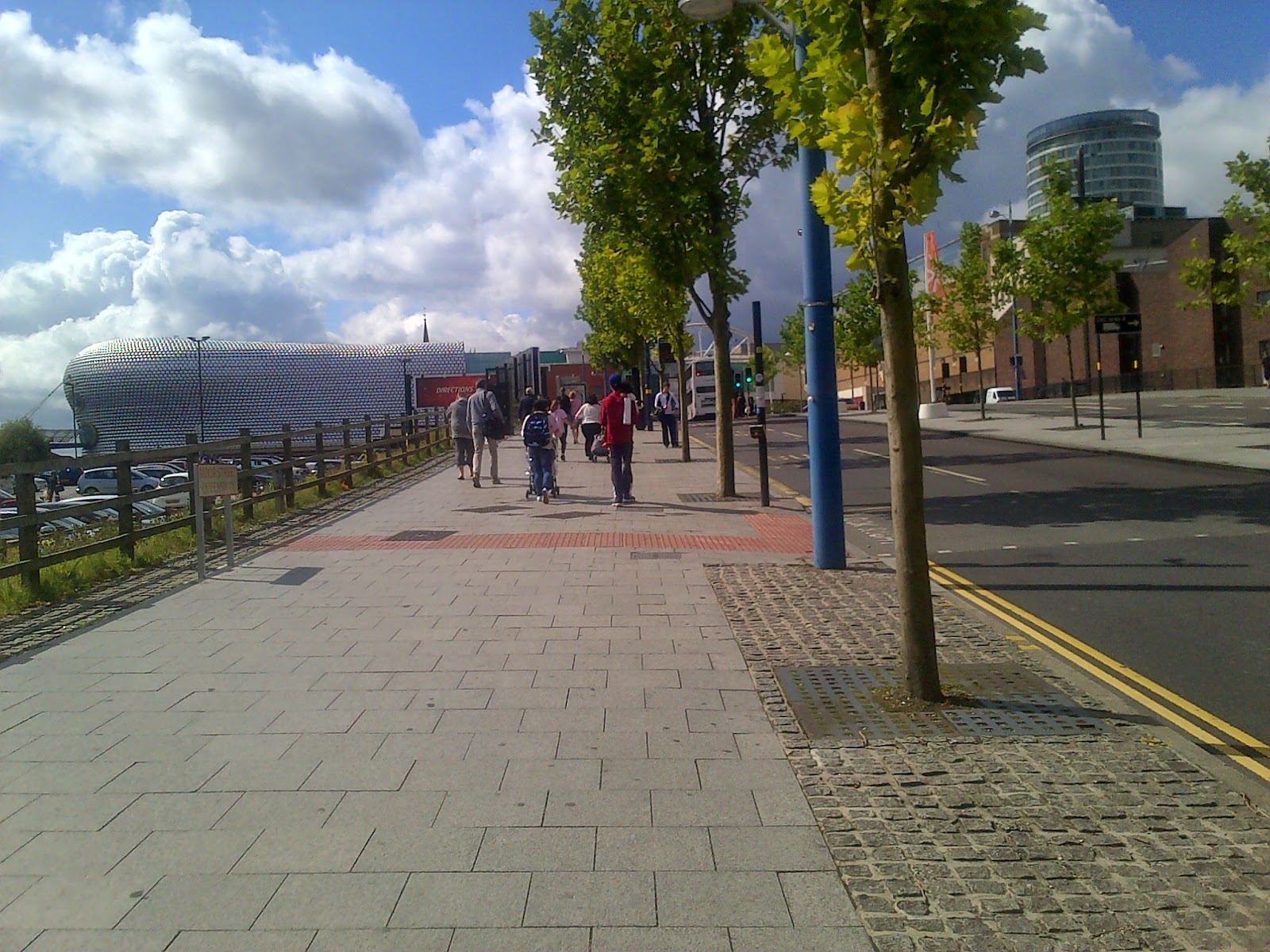 Moor St Queensway footway gets very busy near bus stops and car park
Considerations: Good practice guidance would suggest that all routes offer separate pedestrian/cycle facilities rather than shared use. Would this work around bus stops? Are subways or surface crossings better? Should we replace all paving slabs with tarmac or does the uneven ride help remind cyclists to slow down within the central area? Can we take sufficient space from carriageway for two-way cycling where necessary? Can/should we replace 'toucan' crossings with parallel ped/ cycle crossings? If we can't have road sign poles within footway/cycle track how do we accommodate them? To what extent can we reduce the street furniture - what can we remove? ﻿